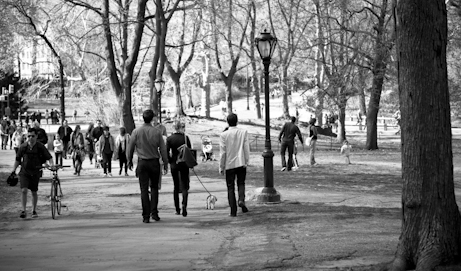 In mid-April the hubs and I went for a weekend in New York and hung out with his boss.  For those of you who don’t know my husband (or his boss) that sounds pretty brutal.  In fact, it was a great weekend, filled with amazing eats, and lots of visiting.  We also stayed at the Trump Soho.  Though there are not nearly enough elevators to service all 46 floors (if I recall correctly, there were 4…) it was an otherwise lovely place to stay, with a bathroom that was about the size of our Toronto apartment. The weather on Saturday was miserable.  So miserable that we had, what I have been calling, a “movie moment”.  Imagine a group of people on a street corner in Soho, a gust of wind, all umbrellas turning inside out, a garbage can toppling over, a girl shrieking an running for cover in a nearby boutique, a man — whose umbrella was destroyed by the gust of wind — giving his umbrella a shake and tossing it in a nearby garbage bin.  It was hilarious (once we got home and dried off at least).  To get out of the rain, we went to the Guggenheim.  Apparently, the rest of New York had the same idea. It was steamy and soggy and a little on the weird side.

Sunday was amazing.  It was about 20 degrees (68 for my American friends).  After delicious dim sum in Chinatown with the hubs’ boss and his wife, we picked up their dog Coco and dragged them up to Central Park.  It was amazing. We wandered around the park and the upper west side (in tee-shirts for part of the day, nonetheless).  It was awesome. Oh yeah, and there were cherry blossoms. All in all, a lovely weekend away!

One Reply to “new york!”