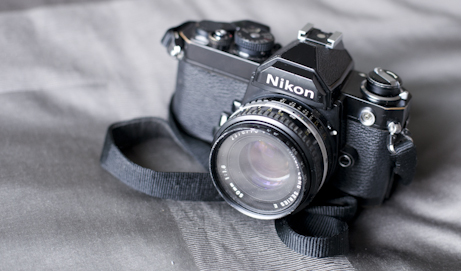 On Sundays, the North Market at the St. Lawrence Market in Toronto is host to a weekly antique market. There are lots of expensive antiques, but if you dig and dig there are lots of deals to be had! Today I got some of the best. deals. ever. Period. (Ok, well, maybe not compared to this insane YHL deal, but these are some of the best. deals. ever. in my life, so there you go)!

The four frames, yellow mosaic thing-y and gray-y green ceramic jug were $1 each, the two necklaces were $5 total, oh, and the Nikon FM and the attached 50mm 1.8 lens and 1A filter were $99. Now we’re talking people!

I’m pretty excited about the four frames, they are all different sizes and are all different textures. I am going to spray paint them white and make a cute little wall display with them! (Two came with glass and two were without, but my vision has no glass anyways, so it should be a super easy, and cheap) little project! Any guesses on where my inspiration for that project came from? Anyone? I’m so predictable…

The ceramic jug will be our new milk jug. It was $1 because it is missing the cap. That’s ok, in my mind it is perfect. It reminds me of the new sidebar link colour on this blog, and the new primary colour of my photography website. I’m just in love with it!

Then we’ve got the two cute necklaces for $5, which seemed like a steal until I found my other steals. The little yellow thing-y may have been an ashtray in a previous life. It has found a new life, for $1 as a repository for my earrings before I hang them back up! (Don’t worry, I’ve scrubbed it down!)

But, by far and away, the very very very best deal of the day was my new film camera. It’s a Nikon FM, all black body – so it is sexy. These cameras were built between 1977 and 1982, making it (probably) older than me! It’s got a shutter release button, which indicates that is actually one of the earlier cameras, so I bet my “new” camera is almost 35!

While I’m a little nervous about shooting with this camera (it’s film, and it’s fully manual) I’m also very excited. Helping me out with my fear is that it does have a, reputedly, very good light meter that has, apparently, aged very well! If I have any problems, the guys at the St. Lawrence Market said I could bring it back. Oh yeah, and they are going to track down a polarizing filter and a 8A (?) filter and throw them in. Just because I bought the camera. For $99. These babies (just the body) sell on ebay for at least $100-$120, then you need to add in shipping and the 50mm F1.8 lens (another $60 – $80) and the filters. I love those guys!

The nice guys at Downtown Camera helped me pick out sweet rolls of colour and black and white film to test it out (respectively, Portra 400 and TMAX 400, for those of you who are into that sort of detail!) So, I’m hoping to shoot both rolls when we are in Canmore next weekend. Check back soon for an update of how it went! So nervous, eek!