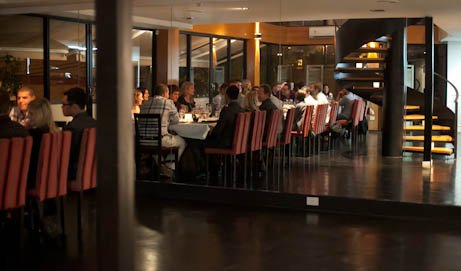 One of the most intriguing and peculiar elements about dining in Buenos Aires is the closed door restaurant, or puerta cerrada. More akin to a dinner party than a restaurant, talented chefs whip up wonderful set menus in the privacy of their home, and they are served around a communal table. Originally the domain of those “in the know”, the internet and sites like tripadvisor and guia oleo, have made them much more accessible to those just passing through.

Our first closed door experience was on Saturday night at Casa Mun. After watching the video a couple of months ago, we were convinced that we had to go. The first date that worked for us was March 17, which ended up being great timing, because we celebrated our tax returns that we received the prior day. Who would have ever thought we would celebrate tax returns and St. Paddy’s day in Buenos Aires eating gourmet Asian food in a fabulous Palermo Soho loft? Once again, I find myself pinching myself and asking “is this real life?”

We made our reservation at Casa Mun about three weeks in advance, though from his facebook page, it looks as though reserving a couple of weeks in advance might be good enough. The week before the dinner, we got an email with the address (unbelievably close to where we live), and a gentle urging to be on time for the champagne reception that starts at 9:00.

At about 9:05 (this is South America, after all) we rang the buzzer on a discreet door and were welcomed by an English host. We made our way up two flights of stairs into a beautiful, moody, loft space where we were welcomed with champagne.

Over the course of the next half an hour, we mingled on the large rectangular patio (well, we didn’t really mingle, we met two very interesting people and ended up talking to them all night). Right before 9:30, we were shown to the tables and Chef Mun introduced himself and told us his story. Before each course he described its origin, his decision to feature it in the menu, and the wine pairing.

The staff was lovely and discreet, the music (50s jazz) complimented the decor perfectly, and the food. Boy, was I ever ready for the food.

I think I muttered to myself “I’m so happy right now” about 20 times over the course of the meal. Buenos Aires is a world class city, but does not feature a great variety of food. For someone from Canada, where you might find a a thai, japanese, ethopian, mexican, local place, and dennys all on the same street, well, the lack of variety takes some getting used to. The thing that I miss the most here is good asian food. It just doesn’t exist. Or so I thought.

Until I saw Saturday’s menu:

I’m salivating just thinking about it again. And it was delicious. After the meal, four of us discussed our favourite part. Two of us chose the seafood pancake in the bento box, one chose the summer soup, and another the pork buns. The spicy tuna was a close second for me.

The highlight of the bento box, for me, was the seafood pancake, though the rest of the course was delicious.

The summer soup was unlike anything I’ve ever tried before. It was a cold chicken soup with a strong sesame flavour (making this the hubs’ favourite dish), shitake mushrooms, a mix of shredded white and dark meat, egg, cucumber, and Japanese mustard.

The sushi was another highlight. Most sushi in BA features the ubquitous cream cheese. And salmon. Several 30 piece sushi menus are all salmon. Not so at Casa Mun. The rainbow roll (with, admittedly a bit of salmon) was delicous and the spicy tuna roll on fried crispy rice was a taste for lonely tastebuds. The only thing we (all) complained about – not enough wasabi.

Next up was the pork buns. The “buns” themselves were perfectly fluffy. The pork was tender and delicious. I always find pork buns (even these gourmet pork buns) a tad sweet for my tastes. But that is a matter of taste, and I can appreciate that these had excellent flavour.

Finally, it was time for dessert, and I have to admit I could have used one more savoury course before dessert. I wasn’t ready a) for the dessert, or b) for the evening to draw to an end. The dessert was the only part of the meal I found a little lacklustre. The lemon whip was shy on the lemon, tasting more to me like condensed milk than a lemon whip. A really interesting feature was the basil. It was a great pairing – I’m going to try garnishing my lemon icebox pie with basil!

Lastly, a word on the wine pairings. They were all excellent. I wish I knew more about wine, but my knowledge extends as far as “I like it, or I don’t”. And I liked it. I especially liked the sake.

This was a wonderful experience complete with wonderful food. At 250 pesos per person including wine pairings ($60), it was great value. I would recommend it to anyone for a special occasion.