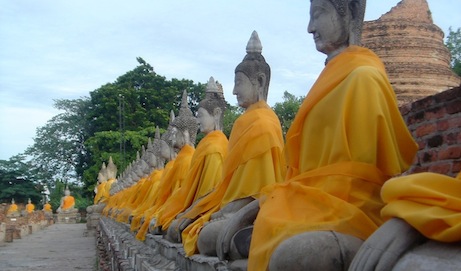 Last Tuesday, I left you in late June 2005 when the (future) hubs and I were leaving Laos to spend just a couple of days in Thailand. The plan? Overnight train from Nong Khai (just across the border from Vientianne), getting off in Ayutthaya at the godforsaken hour of about 5:30 in the morning. Then waiting for the temples to open a few hours later, then spending the morning touring the temples with a tuk tuk driver. Then taking another train to Bangkok where the (future) hubs would get measured for a couple of suits, since he was only days away from moving to Vancouver to start his career.

I remember three things about the overnight train ride: 1) it was hot, and 2) most everyone was drunk (including us and some newfound friends), and 3) I barely slept. But our Ayutthaya stop came ever-too-quickly at 5:30am and off the train we got.

And on top of that we got what is usually an obscenely crowed tourist site all to ourselves. Photographic bliss. Even with two teensy point & shoots.

By about 9am, we had got our fill of wats so we hopped on the next train to Bangkok. We quickly found a tailor for the hubs’ suits (which he still has). Then we spent the afternoon eating som tam (yum!) and shopping for cheapo t-shirts on Khoa San Road. Shortly after nightfall, we happened upon some of our friends from the train at a street bar in Bangkok. Ahh, the Thai tourist trail: I love you so.

The next day, the hubs picked up his suits and we boarded a plane for Hong Kong, where we would meet my parents. I would continue on for another three weeks of Asian adventure, while the (future) hubs would head to Vancouver to start his new career and to start making some moola.

Looking tres cute, all the while.