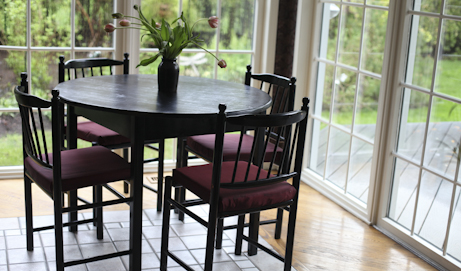 I talked to my mom on the phone last night. She told me I need to blog more. She’s right, but after so many false starts over the last couple of months, it is kind of embarrassing to come back and expect you to like me just as much. Like one of my favourite food blogger’s said today (she hasn’t been blogging much because she’s pregnant and hasn’t been all that into food, other than peanut butter): “It’s a little awkward. Like running into someone you went on a date with two weeks ago and haven’t talked to since the date. So hi, I’m here.”

So, let’s try this again! Way back in 2005, long before I ever became a blogger, I decided I was going to refinish a table. My boyfriend (who you now know as “the hubs”) and I were moving in together and, in my view at least, we needed a kitchen table. Through the preceding year we had spent many, many a dinner at the bar in his apartment. We ate at the bar (or on the couch) because his apartment didn’t have a table. Eating at the bar or on the couch is awesome. Every once in awhile. By about 10 months in, I was over it.

So, before we found an apartment, I bought and refinished a table. That way, we would need to move into an apartment that had room for a table. I’m clever like that :) That’s why I’m a lawyer.

I bought the table off craigslist. And it was what (at the time at least) I thought was the world’s most hideous table (now I actually sort of like the teal and wood). But even worse than the table was certainly the chairs. They were stained reddy/orangey and were covered in some weirdo crazy old cat lady animal print. To this day those chairs still give me the heebie jeebies…

But, the whole thing cost $70, including delivery, so really who was I to complain? 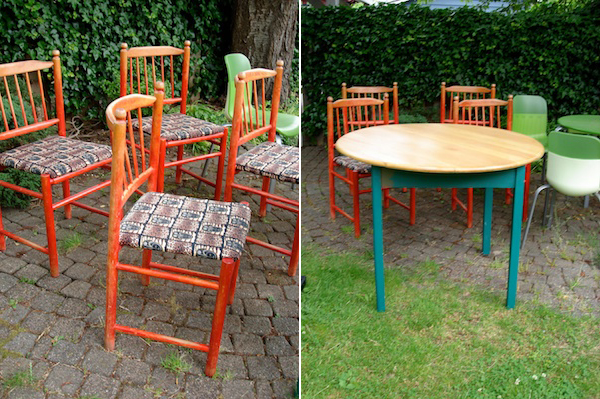 So began the project. With minimal googling (I had a table in my backyard waiting to be refinished!) I was on my way. I bought sandpaper, dark stain and some sort of sealer form the hardware store, I bought fabric and foam from the fabric store (I was young and green… I didn’t realize quite how much cotton batting would help the chairs be better), I borrowed a staple gun from my friend Martin, and I was on my way.

Until I hit a snag… That baby was HARD to sand. It was covered in layers of some sort of varnish and I had bought stain. So, I did what any self respecting girl would do and flirted with the guy at the hardware store until he lent me a power sander.

If I had know at the time that 6 years later I would be blogging this, I would have remembered way more details and taken way more pictures, but, alas, I did not know. So here you are… the in between… 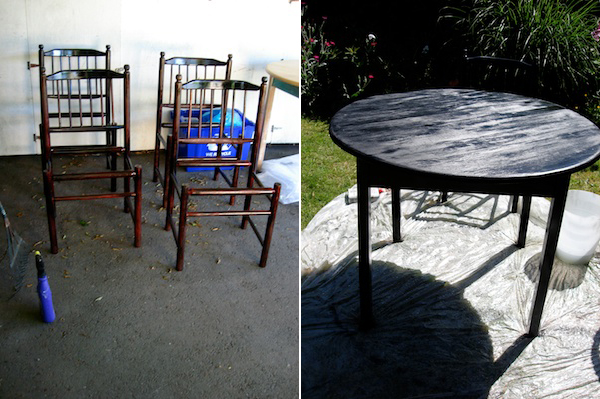 It was something I made, for our first home.

We ate almost every single dinner at the table (rather than on the couch), I served friends, family, in-laws and us on that table.

Sometimes I sewed Halloween costumes on it while drinking delicious lemon drop martinis and eating cupcakes!

When we moved from Vancouver to Toronto (via the world) and kept only one car full of goods, we paid a guy to drive our table across the country so the table could live in my in-laws basement until we found a place.

We bounced a round a couple of sublets when we arrived back in Canada, and when we found some place more permanent to rent, it came semi-furnished. Including a table. So our table continued to live in my in-laws basement.

We were in Ottawa in mid-May and I realized that given some still super secret life plans, there was really no room in our life for that table. (Cue heart breaking). It was also taking up room in the in-laws basement. It was also sort of out of the scheme of my new favourite colours (I want my next table to be white). And it was also out of my new style (I also want my next table to have a pedestal stand and at least one leaf).

So, we brought it upstairs, took some fancy photos of it (with my much improved since 2006 photography skills) and posted it on the list of a man called craig. (Thanks John from YHL for that clever quote, which I now will always use.) 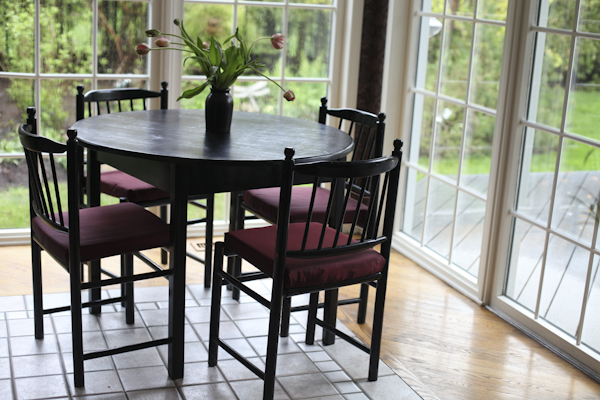 Within the hour a super cute young couple moving into their first apartment arrived to pick up the table for $90. It was bitter sweet, but at least I feel as though that table got a brand new start. Hopefully they love it as much as we did.