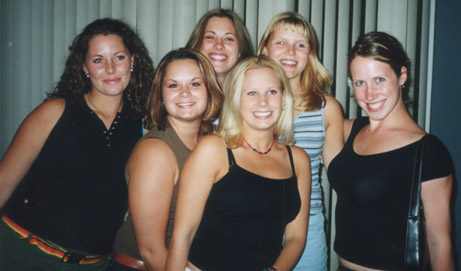 This picture was taken on September 9, 2001, meaning it is almost exactly 10 years old.  These girls were my “crew” throughout my undergrad degree at the University of Alberta, and they remain some of my closest friends to this day.

Of course, since we’re girls, we’ve had our share of “oh my god, I think she’s going to kill be moments”.  But, despite that, we’ve been there for each other for more than 10 years now.  Though we’re all doing different things, and we’re spread all over the country, and we all haven’t lived in the same city at the same time since 2004, whenever we get together it is like no time has passed.

Most of us (except Susan) are all headed to Canmore today for an extended long weekend for Chelsea’s wedding!  This will be the fourth wedding out of the group, which is pretty much just crazy.   (Suze was supposed to be here, but alas, she’s going through what one might call a “complicated” pregnancy and is under strict instructions from her doctor to stay home.  We’re all devastated she can’t be there, but none of us more than Suze herself.   We know that it’s for the best that she not drive 6 hours (x2) this weekend, but we are sad anyways!  We’ll miss you!!)

Tonight we will take fancy limo busses to Banff for a stag/stagette (complete with a whole bunch of Irish folks, can you say “excited”?), tomorrow is the rehearsal dinner (and the spa, if you are the hubs and I) and then Saturday is the wedding.  The last time we took a fancy limo somewhere was for Chelsea’s 21st birthday.  Pictures of that don’t belong on the internet.  But it was hilarious.

I’m thrilled that Chelsea is marrying Eoin (pronounced Owen, if you are anything other than Irish and don’t know that) this weekend.  They are so perfect together.  Preparing for my gig as MC, I’ve spent a lot of time thinking about Chelsea.  She’s a wonderful friend, and a wonderful human being.  She was there on, what turned out to be, one of the most important days of my life!  The day Chels and I picked the hubs up from the airport and billetted him before an undergraduate business school conference.  This next image was taken just 4 days later, in February 2003.

Trying to find a couple of pictures for this post made me realize just how amazing it is to have a wonderful group of girlfriends.  It’s something I had in both Edmonton and Vancouver, but I don’t have in Toronto.  I miss it terribly.  But… not this weekend!  This weekend is for F.U.N.!

Don’t expect to hear from me for awhile, folks!  I’ll be reliving my youth!