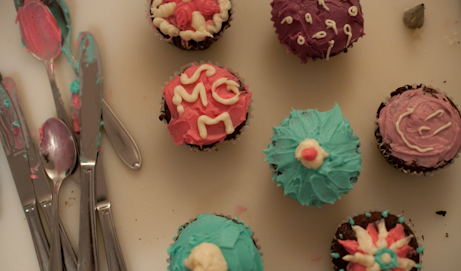 We spent Canadian thanksgiving in Fredericton with my in-laws (the hubs’ mom & dad, his two sisters, and our nieces and nephew). (Actually, the previous weekend we spent in New York with some of the same people, however, my images from that weekend were all b&w film and I haven’t got them developed yet!). We had an amazing two days spending time with these awesome people with whom we don’t get to spend nearly enough time. A couple of days before we left, I came across a recipe for the “world’s best buttercream icing” on (you guessed it) pinterest. Since Kate, my sister-in-law, and I had enjoyed some delicious buttercream frosted cupcakes the weekend before I thought it would be a fun idea to make cupcakes with delicious icing! Stephanie, my other sister-in-law, handed over her kitchen and her daughters and it was really a super fun Saturday afternoon activity!

This really was the best buttercream icing ever. It comes from The Kitchen Magpie – a fellow Edmontonian! The recipe is simple, easy, and delicious (and a bit of a mess… what with mixing the icing sugar and all)! We put the world’s best buttercream on these brownies. They were delicious, but were too brownie like and not fluffy enough for my taste! In all honesty, next time I would use a box of cake mix, making these seriously the easiest cupcakes ever! From The Kitchen Magpie

Directions
First, a quote from The Kitchen Magpie on using salted butter.

Trust me on this one and use salted butter. I haven’t come across a single recipe that uses salted, and I think that is what made the difference. I don’t do unsalted butter. Ever. I don’t even know where it is in the store, to be honest.

About 1/2 or so before you make your icing, set out your cream and butter so they warm up to room temperature. I’m not sure why or where I heard that, but just do it!

When everything is room temperature, use a paddle beater to whip the butter (if you have one). We didn’t, we used a hand mixer, we had no problems with that! Once your butter is whipped up, add in the cream. We used about 3 tablespoons, because we wanted a stiffer icing. More cream = less stiff! You’ll need to do some taste tests and monitor as you go! Next up, vanilla (again, to taste). Then whip away! Once it’s whippy, it’s ready!

We wanted coloured icing – blue, pink and purple. Not very “thanksgiving”, but oh so pretty!

P.S. Thanks to the most amazing Pugly Pixel for these super cute photo frames and fabric strips!