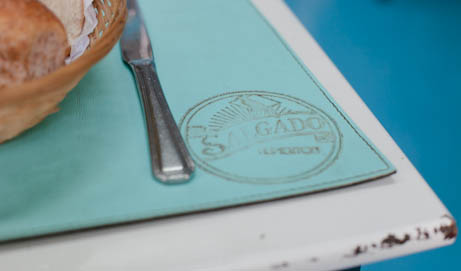 Last week, I learned from some photography clients that Ballet Folklorico of Argentina was putting on a free show at the Tetatro Nacional Cervantes, a beautiful old theatre in Tribunales. That’s the thing I love about Buenos Aires – there is always something amazing (and usually free or really cheap) to do.

The show was in three acts, the first of which had one folkloric dance number, and one tango number, and the following two acts were both tango. The theatre was filled to capacity with a wildly enthusiastic, mostly Argentine crowd. The quality of the dance was great. It was basically better than a tango show… for free! All in all, a pretty pretty awesome way to spend a Wednesday night while the hubs was in Iguazu.

But it did require that I head downtown twice yesterday. Once in the afternoon for tickets (as they were handing them out at the box office all day) and once for the show (which started at nine).

The most direct route to the box office would have been by the bus that trundles down the next street. But 15 minutes away is the subway, and close to the subway is a pasta restaurant that’s name had been popping up on my radar. I fist decided I wanted to try out Salgado Alimentos because of the pictures in this review, I mean how cute is that? But not only cute – it also had a 23 on Guia Oleo.

I arrived for lunch, around 1:15, just as a large group that had taken up probably 20 of 30 seats inside the restaurant was leaving. So, I was in luck – a cute (and cool) inside spot was available! By the time I left (at 2:00) the restaurant was packed, and most of the outside tables were full as well, despite the heat and humidity.

Salgado Alimentos, apparently, used to just be a fresh pasta shop, and you can tell that there roots are in pasta from from the quality of it. I ordered a lemonade (surprised?) and the Raviolines de Asado (stuffed with roasted shredded meat and provolone) and topped with cherry tomatoes, chives, and olive oil.

My pasta was delicious – after the first bite I was hooked. The flavour was unlike anything I’ve ever tried before. Probably because stuffing pasta with roasted shredded meat is not something that most pasta makers take the time to do. And they should take the time to do it, because it was freaking awesome.

Unfortunately, as I got further down in my monster plate of pasta (which I finished, thank you very much) I realized just how much olive oil it was tossed it. Too much. I wanted to take a napkin to it to blot it up. Why?! Why would they do such a thing?!

But, to help me wash down the oil (because there was no way I would waste one single bite of those delicious meat pockets) I had my gigantic lemonade. Meant for sharing, maybe? I don’t know. But people. It was delicious. Maybe even better than Marfa Delivery’s. (No ginger in this one, but lots of minty goodness).

I ate a gigantic bowl of delicious pasta and drank a gigantic lemonade for 50 pesos ($12). I would certainly return. If I ordered the Raviolines de Asado again, I would ask for 1/2 the oil. But, before I did that, I would probably try out a few different dishes, since their creative (and vast) pasta menu is calling to me!

One Reply to “Salgado Alimentos :: Pasta”