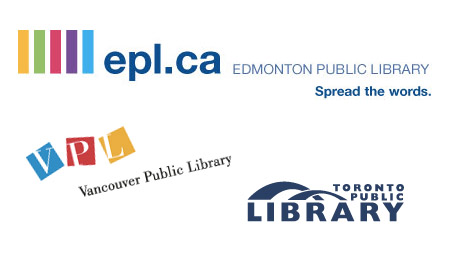 Your Library: Check It Out

First of all, I’ve been planning this post for a long time. Much longer than the Toronto Library strike. So this post isn’t really a political statement.

Second of all, I hope everyone noticed my awesome pun in the title of this post. If you didn’t, take a sec, and go read it again. ‘Cause it’s a good one.

Third of all, I’m pretty sure that this post is going to make my mom’s heart explode (she was a teacher-librarian for most of her career, she’s been a library consultant and she’s got her masters in library and information studies), but I’m writing it any way! Hi mom – please don’t have an exploding heart :)

Libraries are a great equalizer. In most cities, you get access to hundreds of thousands of books, merely by being a resident of that city. In some other cities, Edmonton (where I grew up) for instance, you need to pay a nominal ($10) fee every year. But just think of all the free or virtually free learning and stories that are out there, just waiting for you.

I was trained in the wonders of the library from a very young age. Some of my fondest memories from summer holidays include kicking some serious a$$ at the Millwoods Public Library’s reading club (and yes, I just admitted that on the internet). Even when I tended further right on the political spectrum than I do today, you wouldn’t have won my vote by suggesting cutting or closing libraries.

This is probably because I’ve always been a bookworm. I love quirky characters and a good plot. I adore lyrical language. I love a good story. I love surprises. I love clever twists. I seriously love to read. But books. Books have been the bane of travelling Allison’s existence for years. You can’t take library books if you are going for longer than 3 weeks, since they will expire. A new, English-language novel in most countries sets you back $30+. So you pack your backpack full of 6 books and rely on book exchanges, which are hit and mostly-miss. I’ve read some bad, bad books in my day because I’m desperate for something to read.

But the 21st century arrived, and with it, ebooks and e-readers. Say what you will about e-readers, they changed my life for the better. A bookworm who finds reading ergonomically awkward? Yup, that’s me. Replace a big book with a 2oz e-reader and you have yourself a happy me. I talk with my hands a lot (surprised?) and I realized just how addicted I am to my e-reader this weekend, when rather than doing the “flipping the page” gesture to indicate reading, I did the “press the button”.

E-readers give you access to thousands and thousands of books, as long as you’ve got an internet connection! And several publishers offer cheap or free books (see Pixel of Ink for a good daily aggregator). And popular books range from $10 – $13. A heck of a lot better than $15 – $25 for a used crappy book in a remote book exchange or $30+ for an ok new book in an airport.

But even better than paying only $10 – $13 for popular new books? Paying nothing but your municipal taxes for those same books. Enter the library. Most municipal libraries (in Canada and the US at least) have charged into the 21st century and are lending ebooks. Do you know what this means? This means you can still borrow books from the library while you travel. Game. Changer.

It’s probably a little bit sketchy, since I’ve moved from Toronto (though I’m in this in between stage, so I don’t feel so bad), but I’ve been borrowing ebooks from the Toronto library like a boss. In the past 3.5 months, I’ve borrowed Room, The Elegance of the Hedgehog, The City and the City, We the Animals, I Am the Messenger, Swamplandia, Fifth Avenue 5 AM, A Visit from the Goon Squad, The Historian, The Imperfectionists, Olive Kitteridge, The Sisters Brothers, and Cleopatra’s Daughter. These are mostly pretty popular books right now. And I got them all, from the library, while overseas. Amaze-balls.

So go as fast as you can and check out your local library (). I promise you won’t regret it!

2 Replies to “Your Library: Check It Out”