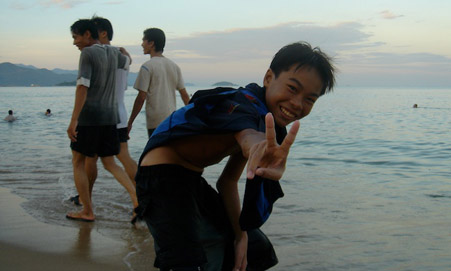 Just a little late with travel “tuesday” this week guys.

Earlier this week (or possibly last week) I learned about a blog called The Dropout Diaries from Sally (Unbrave Girl). I love it. And it was this blog that got me thinking about the several weeks I spent in Vietnam as I travelled around the world, solo, at the ripe old age of 21.

On the beach in Nha Trang this group of guys flirted with me and my camera as the sun set and a hot air balloon took off. 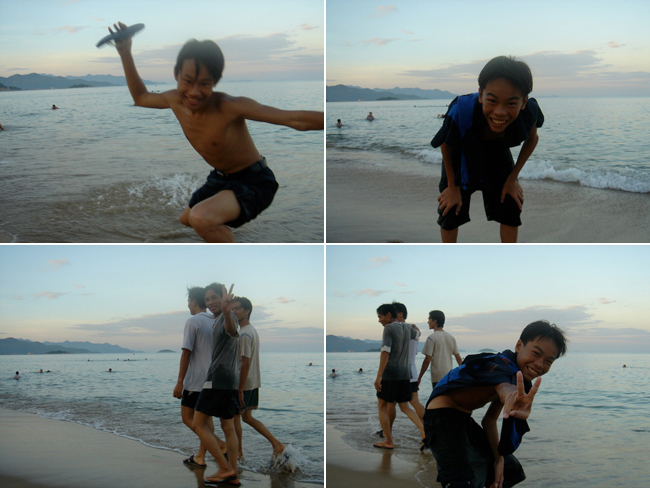 Earlier that day the world’s most type-A traveller (an MBA student at a Southern California university who raced catamarans) found me on the beach and declared he needed another body to share a catamaran, would I join him? I found myself racing across the ocean, and heeling so far that we were practically parallel with the water. After my new friend tipped his hat and left to catch his bus I set out on that beach walk.

This was followed by one of the best meals of my life—a hot pot, but I’m pretty sure the hot stuff-in-the-pot was vinegar. It was so delicious I went back to that restaurant every day of my stay in Nha Trang. Does anyone know what that dish could have been? Now that I’ve remembered it, I’m on a mission to find out what it was, and find it somewhere in Vancouver.

[Update: So I decided to Google this, and it was actually really easy to find (note that last time I googled this about four years ago, I came up blank). But it’s called Bo Nhung Dam. Now to find it in Vancouver!]