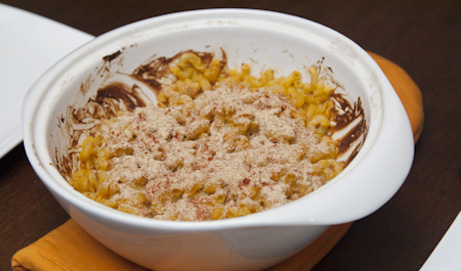 Given some of the recipes I’ve posted to date (including this one and this one) it probably doesn’t come as much of a surprise to you that I’m not quite a vegan. Until fairly recently I sort of thought that vegans were malnourished hippies. In the past several years, however, I’ve started following a few food blogs by vegans, and it turns out a swath of vegans are a health conscious bunch. And the more I thought about it, the more I realized a lot of the vegetarian meals that we eat (and we eat a lot of vegetarian meals) probably qualify as vegan meals, and several vegetarian meals we eat could easily qualify as vegan if I swapped out the oh so flavourful chicken broth for the more subtle vegetable broth. Hmm… maybe these vegans aren’t malnourished hippies after all…

Anyway, I’ve tended to stay to accidental side of vegan cooking, until the wheels started turning a few weeks ago when a post for “Butternut Squash Mac and Cheeze” by Angela at Oh She Glows blipped across my Google Reader. This stuff tastes like mac and cheese. But the cheese is made of vegetables. It blew my mind. And also made me realize that I’m going to be a sneaky ass mom one day. “Eat your mac and cheese kids….”

In my opinion, this dish is best served with a generous splattering of Frank’s Red Hot. Frank’s was an AMAZING addition to this dish. It started off yummy, but ended with a bang.

So, how did I go about making this “cheese”, you ask?

After a few false starts in finding nutritional yeast — the key ingredient for that “cheesy” flavour — I was ready to cook. (FYI Toronto, nutritional yeast is available in Naturally Yours in First Canadian Place).

I thought making fake cheese out of cashews and roasted butternut squash was going to be a least sort of tough. Wrong again, Al. Sure, it’s a little bit messy because you need to use your blender or food processor, but tough? Not so much.

The whole meal starts of with chopping and roasting your butternut squash at 425 for about 40 minutes. You then make the “cheese” out of cashews, nutritional yeast, mustard, garlic (unless your garlic has gone green), tumeric, paprika, non-dairy milk (or if you are me, and not vegan, just plain old milk) and salt and peppper. After you’ve blended all that into a creamy paste, add in the roasted butternut squash and blend some more. At this point, your “cheese” will be really thick, goopy, and orange. And it will look and taste like cheese. Mix it up into a casserole dish with the pasta that you have cooked. Cover with breadcrumbs… Bake for about 25 minutes. And voila… delicious dinner! Apparently, it is not necessary to do the baking step, but I think that the baked dinner was miles better than the spoonful I had pre-baking. Unless you are starving, baking is highly recommended.

You can pick up the recipe over at Oh She Glows – other than using milk rather than non-dairy milk I didn’t really adapt this at all, so I’d rather you get it this recipe from the source!