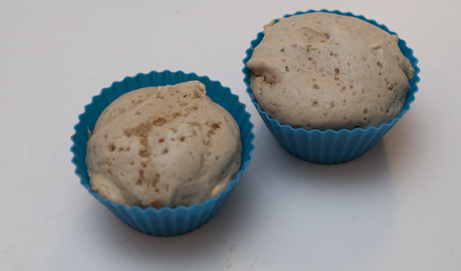 So… last night I was just about to go to bed, I’d been planning for a 10pm bedtime, and it was 9:55. I was pretty much ready for bed when I had a craving for something sweet. And peanut buttery. And my mind flashed back to a couple of recipes I’ve seen in blogland over the past couple of months.  Recipes for raw or almost raw peanut butter cookie dough creations. Like this one. And this one. Yum! So, I said to the hubs “I better go to bed, or I’m going to make dessert”. And he said “WHAT? Why would you go to bed when you can make us dessert?” And so begins the saga of my Peanut Butter Cookie “Doh!”.

This recipe from An Edible Mosaic requires oats, and I had no oats on hand, so I opted to try this recipe for Peanut Butter Cookie Cups from Sing for Your Supper. Peanut butter cookie cups sound delicious right? And they look delicious too.

Because 24 cookies is too many cookies for us, I decided to half the recipe. But. I half forgot to half my flour.* So, I basically I 3/4ed my flour.

*I often half things on the fly while I cook. The original recipe called for 1 3/4 cups, I remembered to half my 3/4 cup… but I forgot to half my 1 cup. Oops.

And then, when I had a crumbly mess on my hands, instead of doing what a sane person — or a person who had a half a clue about about baking would do* — I decided to add water. How much water, I don’t know. Lots. And then it was looking like a sticky mess, and starting to taste, well, not so good, so I added a couple of extra dollops of peanut butter for good measure.

*Just adding more of all the other ingredients.

What I forgot was that water + flour = bread, not cookies. It also sort of equals muffins, which aren’t cookies either. And who wants to eat peanut butter muffin dough? Not me. But, never one to give up, I figured that I had made it this far, and I would give it a go. Maybe it would work.

After creating a minor dough tornado trying to get the dough (which, by this point, was well within the realm of “doh!”) unstuck from my hand mixer, I was ready to go. I filled 2 cupcake cups 3/4 of the way with my dough And popped in the oven for 10 minutes. Then 12 minutes. Then 15 minutes. After 15 minutes, the tops were looking crispy, just like Amy promised they would.

Sure they couldn’t hold a candle to the Amy’s posted above… but they looked … ok … and maybe… just maybe … they would taste ok too.

After hearing the epic battle having just occured in the kitchen, the hubs approached my cookie cups with trepidation. “Have you tried it yet?” He asked before taking his first bite. And so, with a roll of my eyes and with reckless abandon I dove in. And it was really really bad. It really tasted like a raw peanut butter muffin. Which doesn’t sound good. At all. Because it isn’t. I actually ended up eating my ice cream, and a bit of the top part that was crispy (that part tasted like cooked peanut butter muffin, which still not a recommended taste sensation, but better than raw peanut butter muffin dough).

I still think that the recipe would have been delicious if I hadn’t added water and instead had added more ingredients.  Maybe, I’ll try it again one day and report back. But for now, I’m going to remind myself that baking is a science not an art. Well, that’s not true, baking is like paint by numbers. Which is kinda like art for not artistic people, provided we stay within the lines.