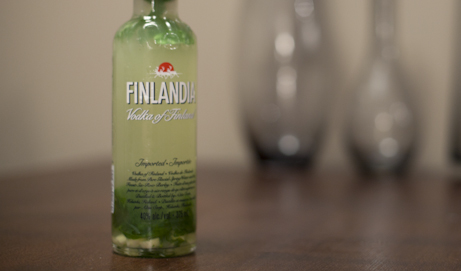 A few weekends ago we were going to a couple of our friends’ birthday party (yes, the plurals and possessives are right) and I just didn’t feel like drinking wine.

Ever since dry January I’ve really cut back on my drinking. I rarely drink on week nights, but even more surprisingly, I tend to restrain myself on weekends as well. My body just liked me so much during January, I decided to try to keep it up! However, there are special occasions, such as a couple of friends’ birthday party, that call for a few drinks.

Let me digress for a moment… In the last couple of years, I have learned that sugar + alcohol, even in moderate quantities, makes me feel b.a.d. the next day. I’ve also learned that if I keep up a steady 1 drink to 1 glass of water ratio, it helps metabolize the sugar (or it just washes it out through my system… whatever, it works!). So, if I really want to have more than a handful of glasses of wine, that’s my strict rule. In addition to helping me deal with the sugar (and pee even more than normal) it also totally cuts back on the number of glasses of wine I can have. Bonus!

Anyway, sometimes I just don’t feel like wine, but I like to keep my 1 drink to 1 glass of water ratio alive and well. This makes drinking any amount of beer very difficult (can you imagine how much liquid you are drinking if you drink one glass of water per beer?! Let me tell you, it’s a lot).

I also don’t really drink pop (or soda if you are one of my friendly American readers). And, as you can imagine, juice is out, too much (say it together) sugar! I even learned that my old friend tonic is laden with the fructose, how sad. So, no mixed drinks for me. Well, almost.

Enter the vodka soda. This drink is low-ish-cal, but more importantly for me it is no-sugar. And, it is inherently a one drink to one glass of water ratio. So, no need to keep track of glasses of water. But, it’s boring. As heck. And seems a little hard core coming from a girl who doesn’t drink much. So, several hours before we left for the party that night I tried to spice it up a little (quite literally) with my very first at home vodka infusion.

I muddled ginger, lime and basil together and then I smushed them (yes, that is the technical term) into the 13oz bottle of vodka we were taking to the party. And while I appreciate I upped the sugar content of my drink by infusing it, I’m still pretty sure it had less sugar than there is in wine. Woo hoo! And boy was it ever delicious. Want some delicious infused vodka yourself? Make your own! Homemade infused vodka is easy, inexpensive and delicious. I give you my recipe, below, but feel free to experiment, and come back and let me know what kind of infusions you come up with. For instance, I’m not a vanilla vodka person, but if you are, I imagine a vanilla bean infusion would be mighty delicious!

By me! Feel free to change the ratios, etc. This one came from my brain.
I made this about 2.5 hours before we left to go to the party. It worked for me!

Directions
Muddle together basil, ginger and lime zest using a mortar and pestle (or if you are frugal like me, using a bowl and a wooden spoon).

Empty an ounce or so of vodka from the bottle into a glass. We need to make room for the infusion! Reserve the ounce of vodka.

Squeeze the four pieces of lime into the mostly-full bottle. Do not discard the rind just yet. Add the liquidy part of the muddled mixture into the bottle, reserving just an itty bit. Smush (there that word is again!) as many fit of the the now muddled basil and ginger pieces into the bottle as well. If there is still room in your bottle (and if there is that means you emptied out too much vodka), add some of the lime rind, no worries!

Combine the vodka in the glass with the reserved muddled mixture and a lime rind. Enjoy that first taste of deliciousness with some soda water while your bottle of vodka infuses.

Go to party. Be the coolest person there.