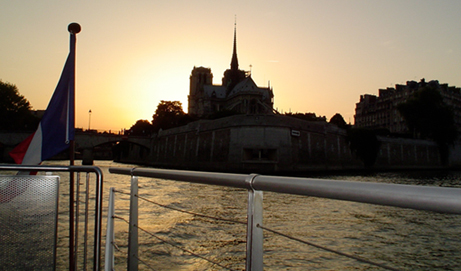 This picture was taken on June 22, 2003. Eight years and one day ago. Wow. It was taken with my very first digital camera, my trusty Sony DSC-P32. Remember those? All itty bitty sensor and 3.2 mega pixels of them?

In all seriousness, I can’t believe this image was taken over 8 years ago; I remember that boat ride like it was just yesterday! I spent a month that summer in Paris with two of my very best friends. (One of whom just told me she’s having a baby, and I have to post this on my blog because I am SO excited!) Before I got to Paris I spent a week in Toronto getting to know the man who, six and a half years later, would become my husband. 2003 was clearly a big year.

On Sunday, the man who is now my husband and I are leaving for Paris. Though he’s been to something like 50 countries, he’s never been to Paris. I can’t wait to share it with him.

Travel Tuesday is going to get extra exciting for the three weeks… live posts from the road! I’m going to try to post an image from that very day. So, next week will be in Paris, the following week from our personal Chateau in the south of France (more details to come), and the final week from Barcelona. Yay!!