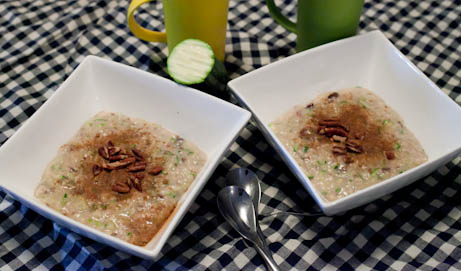 I have been on an Oh She Glows recipe pulling spree for the last several days. Of course, I’m pinning all of them. In the last couple of weeks, every time Anglea has tweeted a recipe, it’s pretty much been exactly what I have been craving. For instance, I’ve been on a bit of a porridge kick, and I was thinking that I should go check out some of Angela’s porridge recipes, when she tweeted “5 Favourite Hot Oatmeal Recipes” (link). Perfect timing! The first recipe that caught my eye was Zucchini Bread Oatmeal (recipe here). Let me tell you, it was delicious! It was sweet, and zucchini-y, and cinnamon-y, and hot on a cold fall morning. As usual with Angela’s recipes, I used regular milk instead of non-dairy milk, but other than that – I stuck pretty close to the recipe, so I won’t reproduce it here. I will recommend you go over there and check out all of the delicious oatmeal recipes! YUM! Nutritious AND delicious! One Reply to “zucchini bread oatmeal”