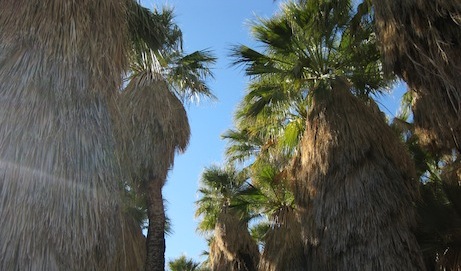 Once again, I’m a little late with my Travel Tuesday post. Or, if I’m being totally honest here – cause that is how I roll – on Tuesday I forgot it was Tuesday and posted my Argentine Asado post. A the joys of being newly self-employed!

No fear, I’ll just give you a “Travel Thursday” instead! Today I’m going to tell you about the Bear Creek Canyon Hike to a palm oasis just outside of La Quinta, California. Actually, we just really get tired of celebrating at this time of year – a gazillion family Christmases, the hubs’ birthday – also on Christmas, and our wedding anniversary on January 2nd, so we just preferred a night off

So, to start the New Year off on the right foot, we decided to go for a desert walk. We had attempted to find the Bear Canyon Creek Trail when we were in La Quinta last year, but we were running out of time, had places to go and people to see, and it’s a good thing too. We never would have had time to make it! In last years post I wrote about our attempt: “The only problem? We had to turn around much too early to go meet some friends for lunch. Next time, desert. Next time we are coming for you.” And come for it, we did.

This is a bit of an extra wordy Travel “Tuesday” post because I need to give you some advice if you take the Bear Creek Canyon/Oasis Trail. Looks easy, right? Wrong. The trail is not, in fact, an almost straight line. It is not, in fact, through a canyon. And it is certainly not, in fact, 2.4 miles. Or even 2.4 plus 0.9 miles (3.3 for those of you who don’t want to do the math). A super marathoner we met out on the trail wagered it was closer to 4 miles!

So, you’ll start off in a wash and the trail will be marked by trail markers. This is good. Once you start getting into the canyon (presumably the Bear Creek Canyon?) and see some rocks and hills on your right, head to the right. You’ll see some boulders and a yellow trail marker. Follow that. If you stay to the left you will miss the final trail marker. How do we know that? Because it is precisely what we did. Here we are, 1 hour into our walk, and we’ve realized that we clearly missed the trail.

But, we didn’t feel to bad, and it took us about 1/2 hour to get back to where the trail actually started. Had we not met our friendly super marathoner at that point, I truly believe we would have abandoned the hike at that point. However, Mr. Fitness told us it was probably 45 hard minutes to the Oasis, our goal!

We looked at our water and decided that we probably had enough for 1.5 hours round trip and started walking. And walking. And walking. All uphill on desert mountain switchbacks. Now, the desert has its own beauty. But we were hot. And we were rationing our water. (When/if you go, please take water. Lots and lots of water.) So, when we posed for pictures we look like we did on the left, however, we felt like the hubs looks on the right. And after 45 hard minutes there was no palm oasis in sight. So we kept walking. And walking. And got so high that we could see the Salton Sea! And we got so high that our starting point at the edge of La Quinta became teensy tiny! But wait. That’s not actually terribly close. Do we give up? We’re tired and thirsty and grumpy. But giving up’s not a very good way to start the year.

So we decided to take it in baby steps and 10 minutes later, we were at the oasis! Sadly, the water in this oasis is only underground. So although you could feel it in the air, you couldn’t splash it all over your body, which was pretty much all I wanted to do at that point!

And then, it was time to turn around. I’m really slow at downhill hiking, but this time I moved. Fast. Downhill was much easier, on our breathing, on our need for water (which at this point was getting silly) and on our heat, as we were facing out of the sun.

Another hour and a half later, we were praising the water fountain. Despite the wasps. All in all it was a great five hour hike in 28/82 degree heat, and an even better way to start the new year. The best part: we realized our goals even though it was hard, we took a detour or two, we were ready to quit (but didn’t), and we really weren’t sure we were going to make it. An auspicious start to the year, I think.