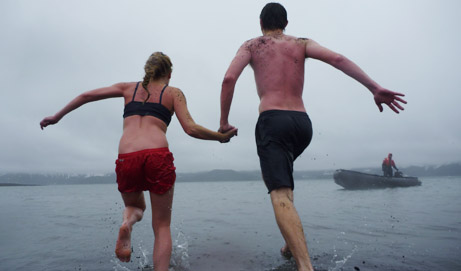 Wow. This is it folks, the very last day of Antarctica trip recaps :'( I hope you’ve enjoyed this week, I know it’s been heavy on both the pictures and the crazy, but I hope you’ve had as much fun as me! And, don’t worry, we’re not through with Antarctica yet. For Travel Tuesday next week, I’ve got a great post planned about last minute bookings to Antarctica, and I’m also working on a short film that should be ready in a couple of weeks. So get excited!

But, back to business! We awoke on Day 8 to Agustin’s voice and the most epic song in the history of ever. So once again, we’ve got a song-of-the-day, and I urge you to play it while reading this post!

Ok. So we awoke to Deception Island Day and Indiana Jones and we were met with … Rain. Wind. Sleet. And Gray. Gray. And more gray. But not even windy, sleety, gray-y could dampen my spirits, because our second stop at Deception Island included swimming. Swimming! In Antarctica!

Before we could swim, however, we had at our first Deception Island stop: Telefon Bay. Where there was actually a pretty awesome hike up to a secondary caldera.

Unfortunately, the wind and the rain whipping down on us cooled us down and soaked us through. If you look closely at my jacket, you can see just how wet it is out there! 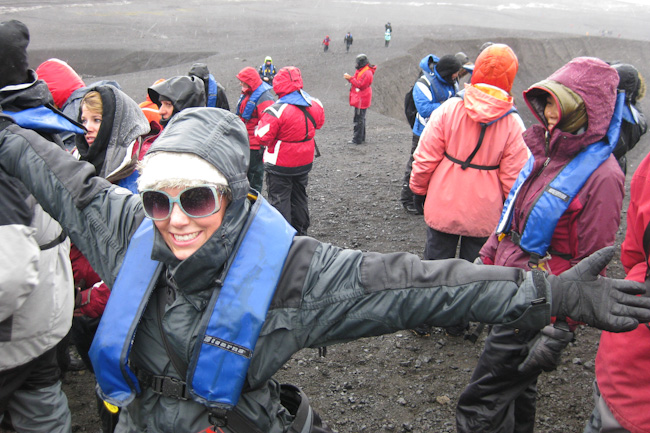 The remaining images in this post images were taken by our friends Maaike, Christian, Pete and Buzz. We really really appreciate that their sharing these images with us!

Here’s the hubs on the zodiac ride between Telefon Bay and Pendulum Cove. Looks not so pleasant out, hey? 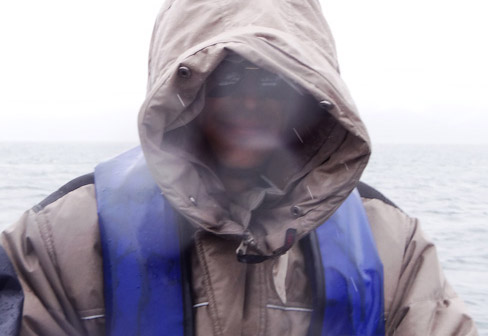 But nothing could dampen my spirits! We were going swimming! And, being a total keener, as soon as we arrived, I stripped down, did a little dance, rushed in, quickly realized that the water wasn’t even kind-of-sort-of-warm (as promised) and rushed out.

Luckily Mark, the first into the water, realized that only a teensy tiny little area next to the shore was hot, and that to take advantage of the hot water, you needed to dig yourself a little nest. So dig I did.

And let me tell you, the water right at the shore was HOT! I would wager that the water in my nest was about 110-115F! 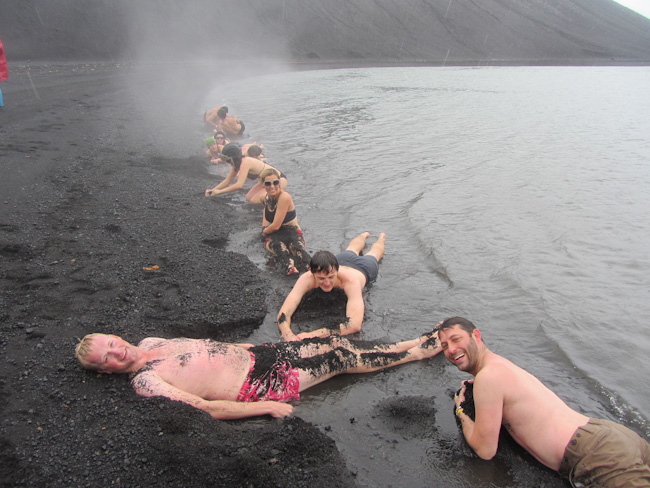 The next hour included several (quick) dips into the water. 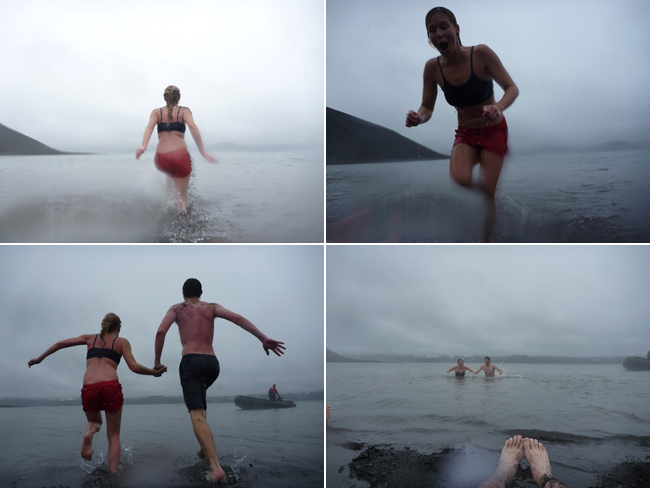 And soaking up the “sun” (in actuality, sleet and snow).

And, despite our squeals, whenever the zodiac drivers would tease us with a drive-by wave, it was a welcome relief from our super hot (almost scalding) nests.

Dressing and getting back to the boat were, shall we say, less pleasant. But it was nothing a hot shower and an electric heater couldn’t fix! 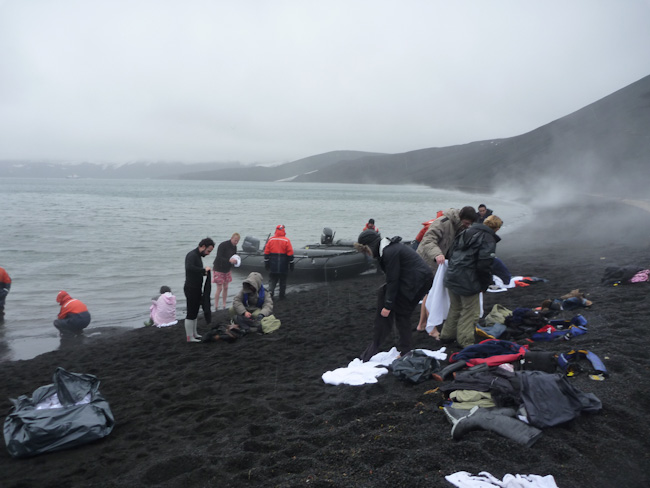 And, once again, that was just the morning.

During lunch we navigated to a Russian station in the South Shetland Islands for what was supposed to be our last landing. The guides were ready, the drivers had the zodiacs in the water, and we were a bit wet, but still excited when the wind picked up to 35 knots and the staff postponed the landing.

Luckily, there were humpback whales swimming around the boat giving us a great show. These whales ended up being a consolation prize when, 1/2 hour later, it became clear that the wind was not letting up and our last landing was officially cancelled. Though it was disappointing, like usual I looked at the bright side and decided it wasn’t so bad that our last Antarctic experience was an icy dip!

After an awesome and celebratory “farewell” dinner that night we set off back into the dreaded Drake Passage. And it didn’t take us long to realize that we were in for it. And in for it we were. 44 hours rocking back and forth, back and forth. In a small-ish boat. In 6-10 meter swells. Tables in the lounge were overturned (more than once). A glass of wine slipped off a table and spilled all over my head. I woke up (more than once) wrapped around the safety bar on my bunk bed. But, thank goodness, we were some of the lucky ones. With the hubs on a low dose of dramamine, and me only popping a dramamine to fall asleep at night, we weathered the crossing quite well.

And it really wasn’t so bad. We were quite prepared with books and movies and games, and in addition to that, there were movies and lectures offered by the staff. On Day 10, we spent some time on the bridge – where we filmed this short clip, which kind of sort of gives you an idea of what it was like.

And, by about 5pm on Day 10, we were back in the Beagle Channel, the water had flattened out, and we were ready for one final dinner (and one final rousing crew party) to celebrate! The hubs and I left the party early, at about 12:30, and stood out on the deck, in the relatively warm air, watching the landscape through the light of the almost-full-moon. It was magical.

We awoke with a heavy heart on the morning of Day 11, ate a quick breakfast and were in Ushuaia by before 8:30am.

On our day hike that day, we had views over the harbour – including views of our little boat. And every time I caught a glimpse of her, I had to take a moment, pinch myself, and ask “was that real life?”.

Thank you so much for reading all 4000(!) words of this series on Antarctica! You can read the whole series through these links:

Several of you have told me that going to Antarctica wasn’t something you had previously considered, but since reading this post, you’ve added it to your list. I think that’s amazing, and highly recommend that you do it! Something on my list – portugal holidays! Doing a trip to Spain, Morocco and Portugal has long been on my travel list.