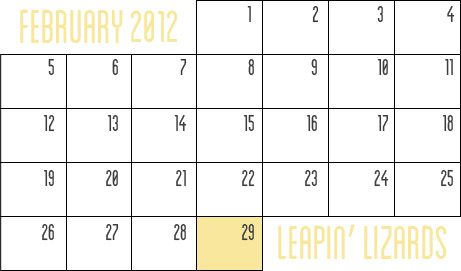 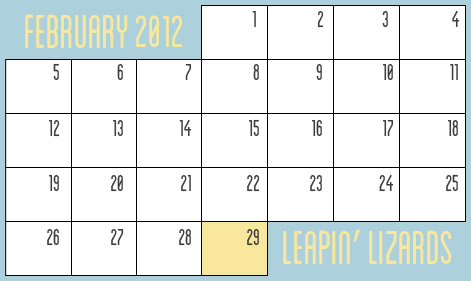 Guess what, everybody? It’s a leap year! It’s not every year you can post something to the internet on February 29! So here I go. And my chosen topic? Leap years. (Surprised?)

I think leap years are king of neat.

My childhood friend Adam, who I haven’t spoken to – or thought about much – in more than 10 years, gets to celebrate his 7th birthday. Happy birthday Adam, wherever you are!

I think it’s kind of weird – and also kind of awesome – that science doesn’t work perfectly. The best way I’ve heard a leap year described is as a “compensation for a cosmological inconvenience“. I love that.

Leap years also kind of throw me off.

I’ve been operating under the premise that I’m doing a iphoneography 365 challenge. Turns out it’s actually a 366 challenge. I just realized this today. Crap. Now to go change the name of my tumblr blog.

But wait! There’s more! You didn’t think random ramblings about leap years were all you were getting today, did you? On Sunday night, I learned about leap seconds, which are needed for two reasons: one because the solar day is very slowly increasing and two, because the atomic second is very slightly shorter than the regular second. I did not previously know about these seconds, but was excited to learn that there is going to be one added to the end of June this year. So I get a bonus day AND a bonus second to complete my 30-before-30 project.

(I also learned about atomic clocks on Sunday night. Do yourself a favour and don’t unless you a) are super physics smart or b) want your brain to explode. That stuff is complicated.)

One Reply to “leaping lizards!”