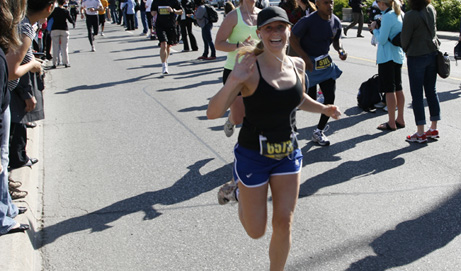 Inspired by my friend Melissa, I signed up for the Scotiabank half marathon in June. I was kicking butt on my training and plugging along ready to try to beat my previous time of 1:49 in May 2010.

(The reason I like running is that picture. See that crazy happy face? Yeah… that’s at 21.5km. Endorphins FTW!)

But given the title of this post, I’m pretty sure you know this isn’t going to happen.

In BA I started to get what I thought were shin splints, so I eased off my training. I assumed it was worn out shoes, so when I got back to Vancouver I bought new ones. That seemed to help the problem a bit, but then 1km into a run a couple of weeks ago, my ankle pain came back so severely that I had to stop and hobble home.

I immediately found a physiotherapist who has finally properly diagnosed me. Turns out, my tendon issue isn’t in my achilles, that is just secondary. My problem is actually in my posterior tibial tendon. This is why my ankle pain has always been on the inside of my ankles. This same tendon is the cause of my “shin splints”—which aren’t shin splints at all.

All of these problems come back to a whole host of lower body problems:

1. Tight calves. I’ve always had tight calves, when I started running when I was about 12 or 13, it was my calves before my cardio that would get me.

2. Wonky hips. They pop in and out. Regularly.

4. Severe over-pronation. So much so that when I watched the video at the podiatrist’s, I almost had to look away.

5. Orthotics that weren’t good enough (despite costing $500 + a $140 consultation fee). With my over-pronation, if I want to run I need orthotics that will cup my heel. And I maybe even need to cram that into a motion-control shoe (TBD by foot doctor through video diagnostic when I go pick up my orthotics). Note: please make sure if you need orthotics you go to a proper foot doctor so you don’t throw away $640 of your (or your insurer’s) money.

While this all really sucks I’m happy that I got it sorted while still on benefits. My physiotherapist is very affordable ($56 per visit), so I can afford a couple of visits a month starting in June once our benefits have expired and we’re both formally self-employed. But really, all it is now is a matter of stretching and releasing my calves and strengthening my posterior tibial tendon. And both of those things I can do on my own (though not as fast as a physiotherapist can).

So, it sucks that I won’t be running the Scotiabank half marathon because I won’t look like this (I’ve repeated the images to save you from scrolling):

If I start a run/walk training plan in early June I still have 18 weeks to train for the Victoria marathon (or maybe half-marathon) on October 7. And the good thing is, I finally feel like I understand exactly what is wrong, and exactly how to fix it. Now to just get it fixed…