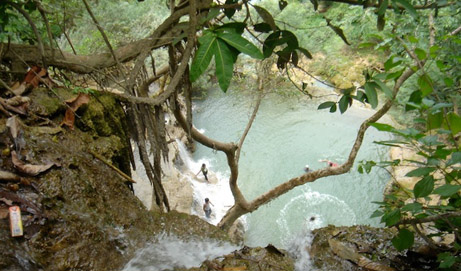 Last week I told you all about our trip to China in 2005. And when I left you we were just about to cross the border into Laos, where we were about to become millionaires. 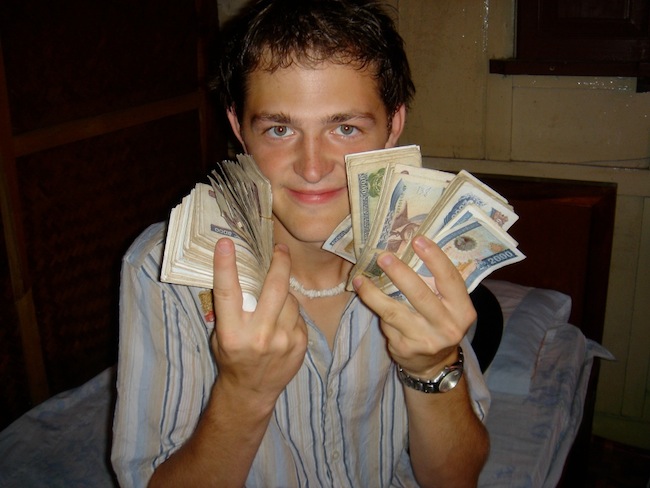 To give you a flavour of just how I was feeling at the time, here is an excerpt from an email I wrote to my parents shortly after our arrival in Laos. (Please forgive the epic run-on sentences you are about to read. I was both excited and 22.)

Well, I made it to laos and whoa, holy tourist. I can’t believe how many westerners there are here, it’s a little bit overwhelming, we were sort of expecting ‘undiscovered’ laos as the guide book says and we were on a bus yesterday with 9 westerneres on it, compared to china, that’s just insane. Two days ago I was SO sick on a bus ride – but the busses in China don’t like to stop for anything, luckily there was a stash of plastic bags right next to my seat. Yesterday I was feeling ok (good thing too, cause there was 2 + 4 + 5 = 11 hours on busses) and this morning my tummy is still feeling a little off, but not too too bad. We are in Luang Prabang, then we will go to Vang Vien and then we will go to Vientianne and then bangkok!

I wish I had pictures of the border towns in China vs. Laos, and why don’t I? Well, because the border is ridiculous, that’s why. It opens at 9am on both sides (despite the 1 hour time change). And the only bus to the first town in Laos—Luang Nam Tha—also left at 9am. Making it seemingly impossible to catch. So, needless to say we were rushing.

But back to the towns themselves, China seriously builds up their border towns. No matter that Mohan is in the middle of nowhere, it was full of paved roads, big shiny new hotels and official looking buildings, and featured a opening-the-border 9am army show (imagine a mini changing of the guard).

And then you cross into Laos (and need to wait 50 minutes for their border to open).

Laos. Wow. Imagine walking, virtually across the street, from shiny new buildings to mud huts and paths. For serious people. It kind of hurts your brain.

And it turns out that even though we didn’t catch a bus (presumably because it left while we were still in line at the border), at least one truck plies the route after 9am. Much after 9am. I think it didn’t leave until it filled up around 11:00. And 11 hours later, we arrived in tourist-haven Luang Prabang.

The highlight for me was the Kuang Si waterfalls just outside of the city. Seriously people, how beautiful can you get?

The town itself was also very cute, and we did a fun hike up the karst peak in the middle of town that afforded some fun views. But apparently we just wanted to take pictures of each other and flowers and not of the views. Oh well, we’re cute too!

Next on our list was Vang Vien. A town that while surrounded by natural beauty, is actually pretty ugly itself. Vang Vien is a little too drugged up and full of special bars serving special everything and showing epsiode after episode of Friends (at least in 2005) for my taste. But it did have karst peaks. And also tubing.

A warning: every year a handful of tourists drown from tubing drunk or high. If you are going to tube, please be careful. If you easily cave to peer pressure, go out in the morning like we did, and you’ll have a peaceful tube down the river before it turns into a crazy (and dangerous) party on the river. 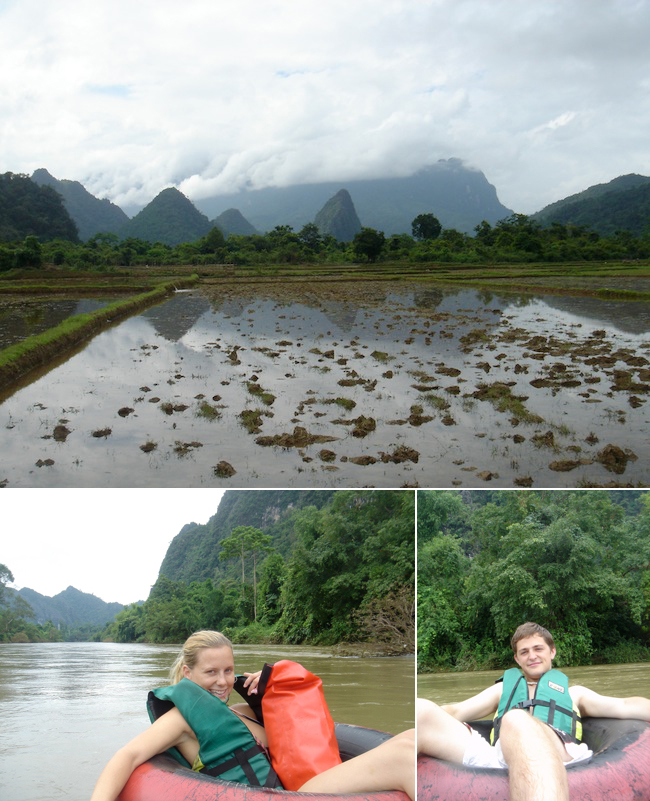 While in Vang Vien we also rented scooters and toured the gorgeous countryside. We may have had a few mishaps (as usual with us and scooters), but over all it was a wonderful way to spend some time. 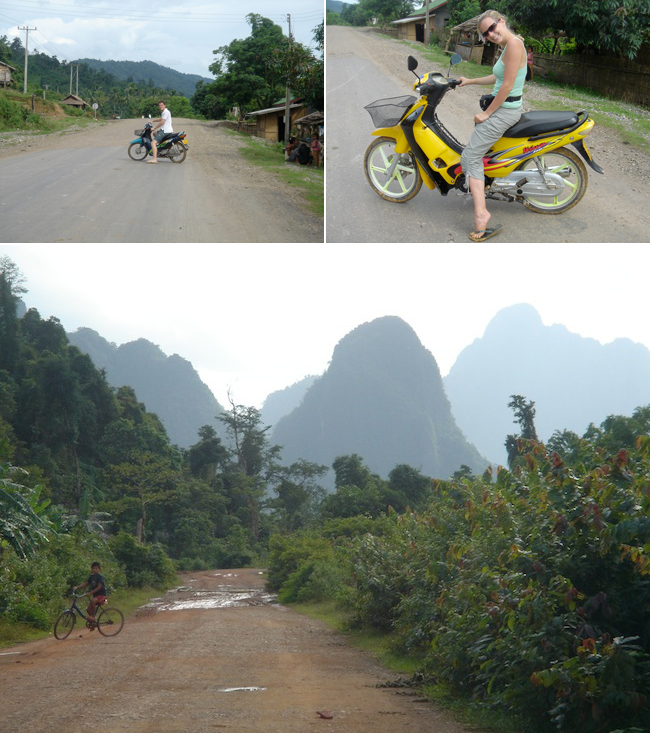 Our trusty Lonely Planet told us about a tour from Vang Vien to Vientianne (the capital) by kayak and bus! While the “bus” part of the tour turned out to be the tour company dropping us on the side of the road to catch the public bus, the kayak part was pretty awesome. Though they did want us to jump into piraña(ish) infested waters, which was a little crazy. 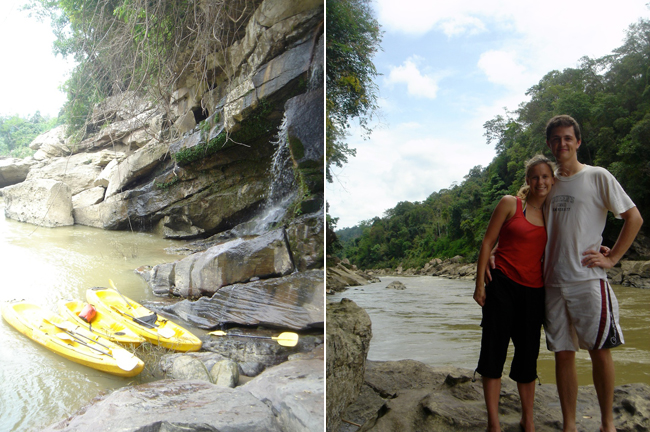 And then we got to Vientianne. Big city. Capital city. Full of shiny wats and pretty buildings. (Also, I’ll have you notice I was color blocking like 7 years ago…) 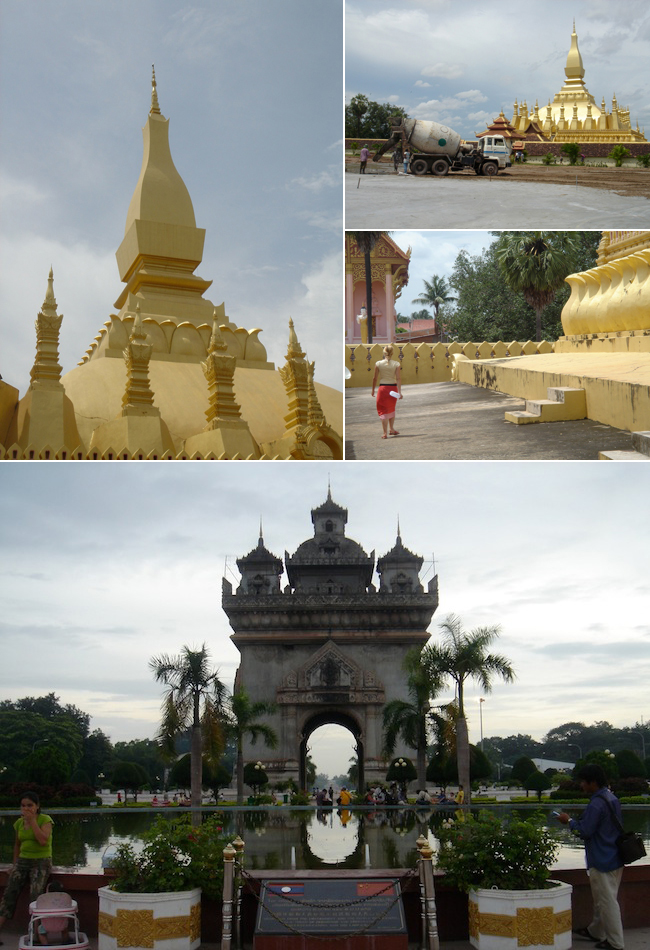 And lots of beer. 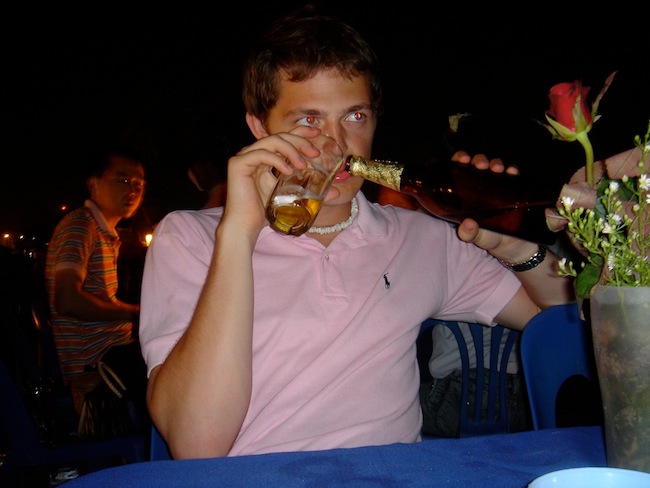 So, our 10 days or so in Laos was a very fun, and very beautiful introduction to a wonderful country. And the next evening, we were off to Ayutthaya. But that is a story for next week!