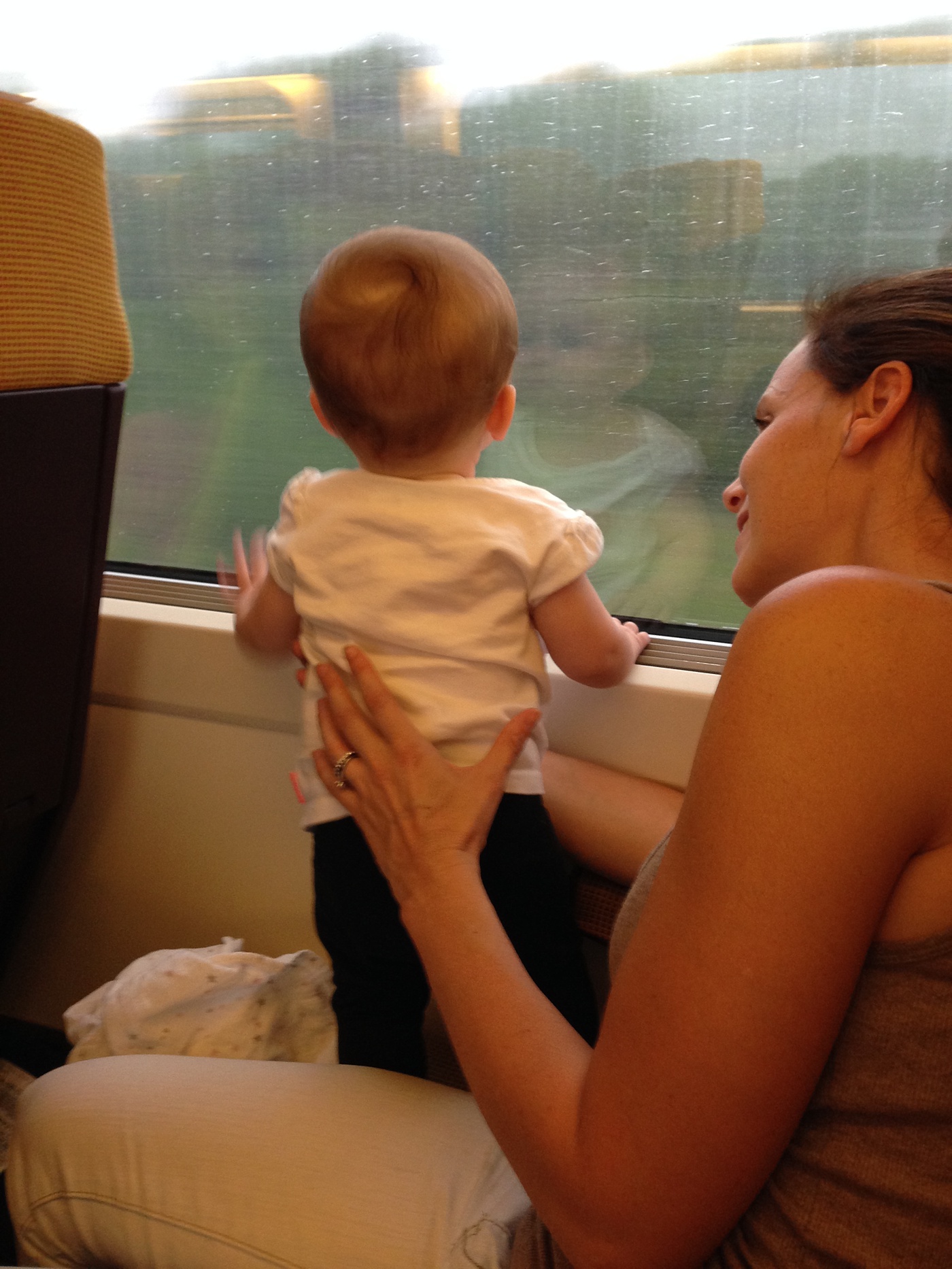 On Saturday night, Clara slept like an angel. She hasn’t slept for seven hours in a row for months and months, so it was such a treat for us all!

Sunday morning was a bit of a blur; I got up early to pack our bags, and Clara and J slept in a bit. We’ve discovered this is the most efficient means of packing :) When our host came to check us out of the apartment and to say goodbye we almost got our timeline derailed by a discussion of separatism in Catalonia… luckily we were able to cut that conversation short and leave in time to catch a commuter train to Barcelona! This particular train was the part of our trip about which I was the most worried: we have Clara, her stroller, her car seat, a big backpack, a big rolly suitcase, a diaper bag, a briefcase, and a little backpack and just two adults to get the baby and all our stuff on and off the train during a commuter train-length stop. But we did it, and looked something like this:

(I did actually help a bit more than that!)

We had about an hour and a half to kill in the Barcelona train station, so we stopped for food. In Barcelona you can get tapas in the train station. While it was still train station food, it’s certainly a step up from your average prepackaged sandwich!

The fast train to Madrid was a breeze. The seats were comfortable there were power outlets, and Clara loved looking out the window. She especially loved when we would go into or come out of the tunnel and the view in the window would change dramatically.

Our arrival in Madrid was a bit more hectic, we had trouble finding the taxi stand, and then we had trouble getting in touch with our host. Turns out the latter was an AlBug, she was in the apartment the entire time.

But getting to the apartment made up for everything. This one is beautiful, and seems to be a bit more baby safe than the last one. Something about laminate (vs. tile) flooring we think. This apartment has a tiny functional kitchen, adorable bright bathroom, living room complete with a chaise, and a large bedroom. The kitchen and living room overlook a bright, south facing courtyard, there’s a fairly bright lightwell in the middle of the apartment, and the bedroom has a large desk and french balcony over looking the street so various rooms are bathed in light throughout the day.

Clara’s favourite part of the apartment are the strings that separate the living room from the kitchen. It’s like hair but better! (Don’t worry, we’re keeping it baby-safe!) We spent the early evening exploring the neighbourhood and going out for a local dinner.

Well, sort of local, who’s ever heard of a Soho burger, potato wedges (deluxe fries) or beer at McDonald’s?!

Clara didn’t sleep quite as well on Sunday night, but we don’t think it was jetlag. We think she was maybe a bit scared. This is her sixth different sleeping place in 11 nights! She’s quite the little traveller!

On Monday, we started to try to get back in a little bit of a routine, I woke up and worked, then we went for a family lunch on a terrace, and then J worked from a café in the afternoon. Meanwhile, Clara and I played.

Baby Playing! Thanks @thisisalexis for the inspiration :) #hyperlapse

I also found the local hypermarket and cooked us a delicious dinner of Calabrese salad, eggplant bruschetta, and grilled chorizo.

Our sick baby is finally getting better—as evidenced by the enormous amount of food that she ate at dinner! Then it was into the bath and off to bed for her.