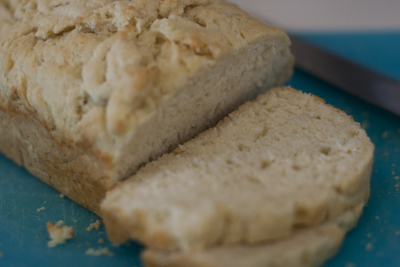 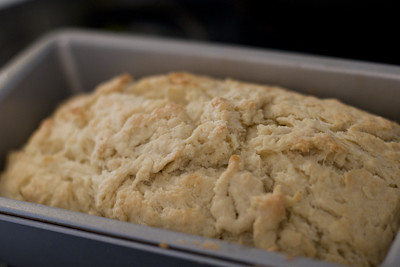 I discovered Gabrielle of Honest Fare’s recipe for Beer Bread in a roundabout way through pinterest.   (Yet another reason why I love pinterest).

I’ve never made bread before, unless standing around while my best friend’s mom made bread with her bread maker counts… At the best of times, I’m not much of a baker so I really didn’t foresee myself EVER making bread. Until this delicious looking bread and this little quote caught my eye:

Bread scares me. Not eating it. It’s the making of it that I’m terrified of. Floored with fear, I tell you. The whole yeast thing gets me. It seems too temperamental and unforgiving. Then there’s the kneading and waiting… Au contraire—there’s beer bread.

Hmm. Me too! And if she could do it, maybe I could do it after all. And the recipe is dead simple. Grab a beer, some flour, baking powder, salt, sugar, butter, and a loaf pan then pre-heat your oven and you are good to go. And this is your result. 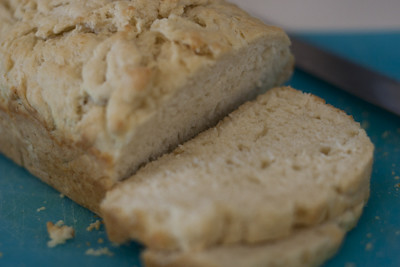 Tasty delicious beer bread. Bread that makes your husband swoon. Bread that is so easy and so delicious that I even made a second loaf as a hostess gift for a dinner party that night.

[Side note: That all being said… I attempted take 2 using a Coronoa while in La Quinta last weekend. Miserable failure. It just didn’t really cook through, and after over an hour, I gave up and pulled it out of the oven. Unfortunately, I’m not enough of a baker to know quite what went wrong; was it the altitude? the amount of beer? different hoppiness? the dryness of being in the desert? I don’t really know. And I was on vacation so I wasn’t about to try it a second time. However, my advice remains: if loaf # 1 doesn’t work… try again with a different beer. It’s totally worth it. ]

We used said beer bread to make the world’s most delicious grilled cheese sandwiches. Once more, inspired by Honest Fare. 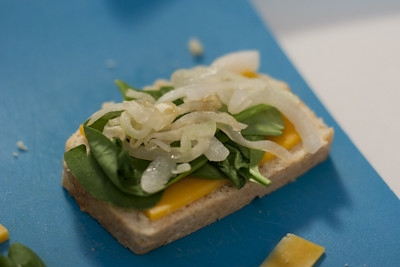 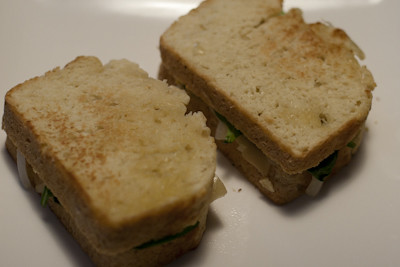 My grilled cheese differed from Gabrielle’s in that I didn’t add mustard (not a fan), I fried (but did not caramelize) my onions, and I added some spinach for a little bit of green! These were one of the best Saturday lunches we have ever had.

In a large mixing bowl, combine all-purpose flour, baking powder, salt and sugar. Sift well with fork. Pour in beer, stir until a stiff batter is formed, but don’t over mix (best to just use your hands). Scrape dough into prepared loaf pan. [I found this dough really really sticky in Toronto when it worked and not so sticky in La Quinta when it didn’t. Maybe add a little more flour if it isn’t really really sticky?]

Melt butter and brush across top of dough. This is optional (if you’re vegan), BUT it really adds to the crust. Makes it golden and crusty! [The butter makes it delicious. Period.]

Bake for about 40 or so minutes or until a toothpick inserted into center of the loaf comes out clean.Bake time will vary with beer type. [This is where I bid you good luck. 42 minutes was perfect for Singha Beer Bread!]