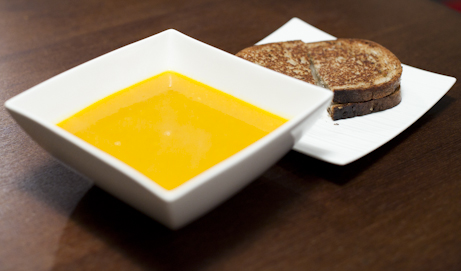 Oh yeah, and in addition to the spicy pumpkin soup, I’m also going to introduce you to Al’s Curried Butter Brie and Pear “Panini”. So basically, today is nothing but delicious!

First things first, as I mentioned in the earlier post, “pumpkin” is actually Australian for “butternut squash”.  Which is confusing.  Crazy people down under.

I admit, I have a disproportionate number of butternut squash recipes on the blog. But it is just so delicious!  And it’s been winter since I started the blog… and squash is so wintery. The flavour in the soup comes from butternut squash, onion, garlic, ginger … The first step is frying up the “pumpkin”, onion, garlic, ginger, and turmeric in a saucepan. After a couple of minutes, its time to add the chicken broth! Turn the heat way down and set it and forget it, covered, for about a half an hour. Then its time to blend. The recipe tells me to let it cool. I never ever do this. Does anyone know why I’m supposed to do this? Anyway – I usually ladle all my piping hot soup into the blender and puree it for 15-20 seconds. You want this soup to be smooooooth. Together, the “panini” and “pumpkin” soup are simply amazing. Directions
In a large saucepan, melt butter or olive oil over a low heat and add onion, garlic, ginger, turmeric and butternut squash. Cook for 2-3 minutes, then add stock and bring to a boil. Simmer, covered, for 20-30 minutes until squash is tender. Remove from heat and cool a little. (Or, as I mentioned before, don’t, doesn’t seem to matter).

Place in a food processor or blender and puree until smooth. Return to the saucepan and gently reheat (if it is cool, you can skip this step if it is still piping hot). Mix creamed coconut in water until fully dissolved. Stir into soup creamed coconut mixture, sirachia (to taste) and a squeeze of lemon juice.

Enjoy! And trust me… you will!

Directions
Cream together soft butter and curry powder. Butter outsides of bread (as if you are making a grilled cheese sandwich, but remember people, this is a “panini”.

Thinly slice brie and pear. Make sandwiches by layering one piece of bread, one layer of brie, on layer of pear, and the other slice of bread.

Now… if you have a panini maker, use it to make a panini, yum! If not, like me, you are going to tiptoe into the realm of the grilled cheese… Heat up a little butter in a frying pan, and fry both sides of your sandwich until cheese is melted and bread is golden brown.

Enjoy! And trust me again… you will!