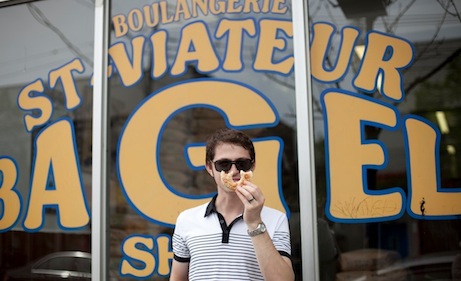 As promised, Travel Tuesday is something just a bit different this week (and likely for the next 10 weeks or so). Rather than just an image, it is a little glimpse of some of the trips we’ve taken throughout 2011. One such trip was over the May long weekend (about May 24) to Montreal.

I’ve not been to Montreal since I was in the eighth grade, for those of you in a different school system, since I was about 13 years old. Everyone talks of how wonderful Montreal is, but my teenage memories were of a city that was quite simply not as good as Quebec city. Not as pretty. Not as old. Not as interesting. Worse weather. But awesome Cirque.

Flash forward almost 15 years and the hubs and I decided to take a long weekend break to Montreal, and what an amazing idea it was. To my grown up self, the city feels like nowhere else I’ve ever been. It’s a bit European, a bit North American and a bit of its own thing, all rolled into one. Not only that, but we where there when the weather was changing (to spring… a little late, but better than never). It was the first real weekend of spring – which does a wonderful job of colouring any visit to a city in a lovely happy pink-ish hue.

So, what did we do? Well, after taking the train from Toronto, we stood in line and enjoyed some delicious smoked meat, we sat in an amazing park, I shot a rooftop engagement session for a lovely couple, we ate delicious breakfast – one of the best breakfasts of my life – courtesy of recommendations from multiple friends, where I decided once and for all that I was over being over coffee. We wandered up and around the mountain and watched the tam tams, we rented bixi bikes and toured the city, we visited old Montreal, I enjoyed my very first ever Montreal bagel (w.o.w.), and we spent some time updating the hubs’ spring wardrobe. We stayed in a totally acceptable, but nearing the skeezy part of town hostel, for next to nothing, if you aren’t picky – I would highly recommend it. All in all, a lovely lovely long weekend.

And – in those three short days in Montreal – I learned that there is so much more to see and do. Montreal, one day I’m coming back to you.