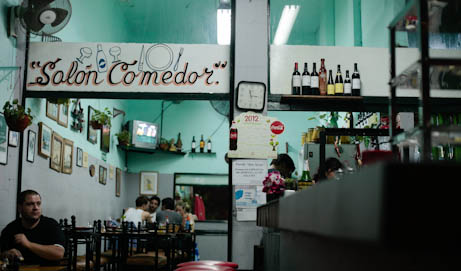 I’ve had very, very good luck in my life with hole in the wall restaurants. And Don Niceto, a parilla not so far from our apartment, just adds to the long list of delicious food we’ve eaten in less than pretty locales.

Don Niceto is not fancy. At all. But it has got a certain grubby ambience (these pictures actually bring out more of the ambiance than the grub.) Trust me, it’s a little grubby.

Shortly after we arrived, the server came to our table with an expectant look on his face. Menus? The hubs asked. No menus, instead he rattled off, in super quick spanish, a list of various cuts of meat. Luckily, I’m pretty up to speed on my cuts of meat, so we were able to order. He was a great server, and patient with my Spanish.

The wine list is a wall full of cheap bottles, just waiting to be consumed.

Here’s where this place gets good. We started with a proveleta – fried cheese – perfectly seasoned and a BA staple. Next up, our lettuce and tomato salad – again, tasty, but not a stand out. It was just lettuce and tomato, after all. The french fries arrived next, and I wouldn’t order them again. Or the Benidorm ketchup, which looks like a cleaning product and tastes like sugar.

Ok, Allison, you are thinking, why all the ranting and raving in the intro, if everything so far has just been ok? Two words.

Wow. It’s up there with the best steak we’ve ever eaten (top 2 for me, top 3 for the hubs). That’s saying a lot. The server suggested two steaks for the three of us (they are gigantic, after all) so we ordered an Entrana (skirt steak) and a Bife de Chorizo (sirloin). They were cooked to perfection, and oh so tasty. I don’t know what kind of salt the cook uses to season his meat, but it’s amazing. And the meat itself – wow.

It was so good that the hubs decided we needed a second bife de chorizo, much to the delight of our server. I really only just want to go back and eat delicious meat.

At 168 pesos + tip (about $45) for three of us to eat dinner, including coke and wine, I’d say this restaurant is the deal of the century. It was seriously so good. If you love your meat – I do recommend one order per person – it’s that good.