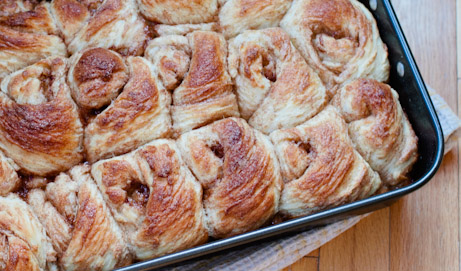 U of A Tuck Shop Cinnamon Buns

You know how nothing beats a puffy, gooey, cinnamon bun? Well, do I ever have a recipe for you!

This recipe for cinnamon buns comes courtesy of my mom: (way) back in her day as an undergraduate student at the University of Alberta, she used to drop whatever she was doing at 10am and line up for a cinnamon bun from the U of A Tuck Shop. The Tuck Shop is gone (it was already a distant memory in my time at the U of A from 2000 to 2004), but at a recent reunion the University opened a temporary Tuck Shop cart where they sold cinnamon buns and handed out the recipe.

Mom was a little nervous to try making them—mostly because she was afraid they wouldn’t be the same—but when I arrived home for 10 days, she didn’t hesitate to ask me to give them a try. (With a severe warning that if they didn’t turn out as expected she might have to disown me).

Luckily for me, my mom, and my friends who were out at the cabin when I gave them a try they were delicious.

These cinnamon buns were moist, puffy, a little yeasty, and cinnamon sugary: everything a cinnamon bun should be. We devoured most of the pan in the morning, and in the afternoon served them with a simple glaze of butter, brown sugar and cinnamon (the glaze should become a permanent addition).

From: The University of Alberta 80th Anniversary Recipe
Makes: 18 cinnamon buns. These cinnamon buns can either be made the day of (requiring about 4-5 hours), or you can make the dough and do a first rise overnight (steps 1 through 5). In this case, you’ll need about 2 hours to prepare, proof, and bake the morning of. You might also try to steps 1 through 9 the night before and then cover and let prove (proof?) in the fridge overnight. I would let the buns warm to room temperature before baking.

3 Replies to “U of A Tuck Shop Cinnamon Buns”