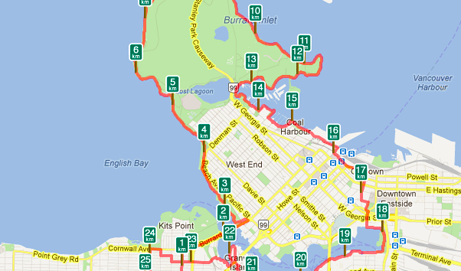 If you are wondering about how I fared in my 30-before-30 post, head on over the the 30-before-30 page, where I’ve just posted an in depth update! In other news: I had an awesome day yesterday.

I woke up at 6 (I’m a morning person, yo) to the best card and gift ever from the hubs.

Then I got to pull one of the “30 Things We Like About Al” from the gift my parents gave me! Yesterday’s thing? That I’m an Excel guru.

After about an hour of work at my computer, I was off to use my free birthday drink at Starbucks. I got a Venti.

I also stopped at Cobs and at the grocery store to pick up ingredients to make myself delicious french toast.

I then sat down and coloured for a few hours while I waited for the hubs to wake up.

When the hubs woke up, I made him some french toast while I opened the card from my grandparents, my in-laws and my brother. They were all so good!

After about an hour more of work, we set off on #fallwalk2012. (Each year we do a long walk in the fall. This year: 25.5 kms, a record even by fallwalk standards!)

We crossed the Burrard St. bridge, did the seawall all the way around the West End, Stanley Park, and Coal Harbour, crossed through Gastown to meet up with the seawall again before Science World, took a detour onto Granville Island, and then back to Kits.

We had planned on going for a nice dinner – likely to Vij’s – but by the end of fall walk we were plum worn out. So we stopped for beer and wings (and dry ribs and bugers) on the patio of our favourite local pub. This was extra good because we had just spent a dry September, where not only did we not drink, but we didn’t eat things like pub food.

Then we picked up a Safeway pumpkin pie for $2.99 and ate it while watching the reminder episode and the season premiere of Revenge.

So all in all, I had a perfect day.

Happy Thanksgiving to all my Canadian friends, I’ll be back on the blog on Tuesday!