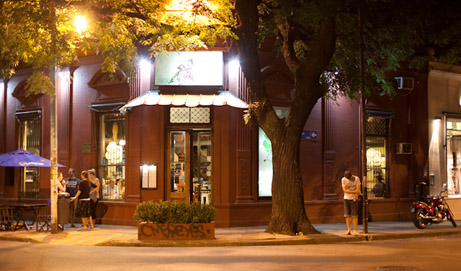 The food blogger community is abuzz with Tourism Richmond’s recent announcement of the 365 Days of Dining Competition. And for good reason, it’s the opportunity of a lifetime for someone who loves food, loves to blog, and loves to explore.

Hmm… sound like anyone you guys know? Possibly moi? Several people have encouraged me to apply. So I’m going to. Along with thousands of others, I’m sure :)

My application is actually ready to go – it took me days to perfect and I’m really proud of it. So proud that I think I just might have a shot at this one! But in the process I realized that while I’m often blogging about food, I don’t often blog about restaurants. And to prove my mettle as Richmond’s food blogger, this needs to change! So things are going to be a bit different here for the next couple of weeks! I suspect that Tourism Richmond officials will be checking out our blogs to make sure we’ve got the right kind of voice (Hi, Tourism Richmond! Welcome!), so I’ve decided that there is no time like the present to prove that not only can I cook and post recipes, but I can review as well! So, I’m casting aside all my other posts for the rest of this week (including today’s Travel Tuesday) and am going to try my hand at blogging about restaurants. So, let’s go! 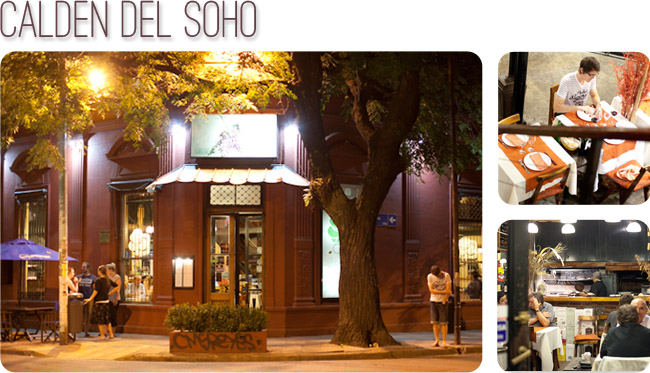 A few months ago I told you a bit about Argentine asado. This pervasive barbeque culture has resulted in thousands of parillas popping up throughout the city. One of which, Calden del Soho, is only two blocks from our apartment. The hubs has been wanting to try it out since our arrival, and last Thursday, after checking out a few reviews, we gave it a go!

What first struck me when I walked into the restaurant was the atmosphere. The brick walls, wooden tables, colourful accents, open parilla, high ceiling, and small upstairs section combine to draw you out of trendy Palermo and into something a little more homey. We arrived at 9:45, early by Buenos Aires standards, and had our pick of tables. By the time we left at about 11:30, the restaurant had filled up with a mostly local crowd in a wide age range.

I was also struck by the service. I find in Argentina I’m usually left wanting a little more from our server. Not so here. Our server was excellent and the perfect amount of attentive. 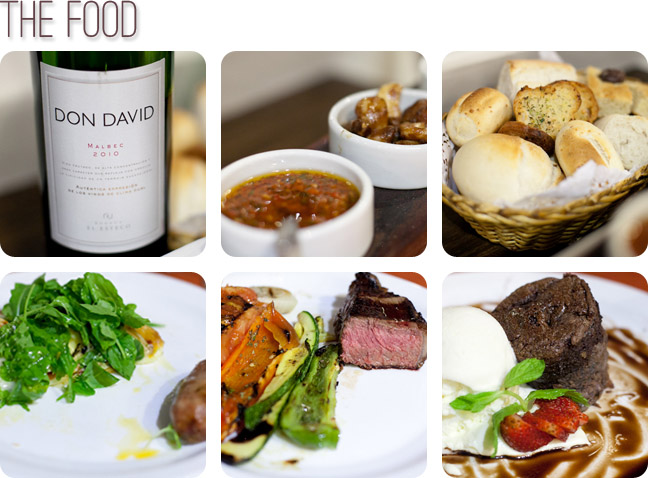 The first thing that I noticed about the food was the high quality of the bread and the accompanying garnishes. The chimichurri was great, but what really stood out was the bowl-full of roasted garlic. I don’t really want to think about how many cloves of garlic I consumed that night!

As an appetizer, we shared two small chorizos and the stuffed proveleta with arugula. Seasoned grilled proveleta is a staple at any Argentine parilla, and this stuffed version kicked it up a notch. While the cheese was delicious, there was just too much of it for the two of us, I would recommend it for a group of four. The small chorizos were great – not too fatty.

We split a bife de chorizo (sirloin) bien jugoso (very rare) and a side dish of grilled in season vegetables as a main course. As usual, I found that my meat was a bit overcooked (Argentine’s prefer their beef cooked medium), but despite that, it was melt in your mouth tender. We both added roasted garlic and chimichurri to our beef. Taste explosion. The vegetables were grilled well – but were a bit oily for my taste.

After all of that food, I didn’t have any room left for desert, but despite some lacklustre reviews on the chocolate volcano, it was calling my name. And I’m glad that I listened. At home, a volcano means there is delicious melty inside. Here, not so much. Despite that, the warm chocolate cake (in a conical volcano-like shape) was up there with the best, most moist cakes I’ve ever had the pleasure of enjoying.

I had a wonderful experience at Calden del Soho, would recommend it to visitors to the area, and would certainly return myself. Two of us ate (too much!) and shared a bottle of Don David 2010 Malbec for 275 pesos plus tip (~$66).

On Guia Oleo, the local restaurant review site, it’s got a respectable 21 out of 30 rating and it was highly reviewed by both by the Lost Asian and tripadvisor users.