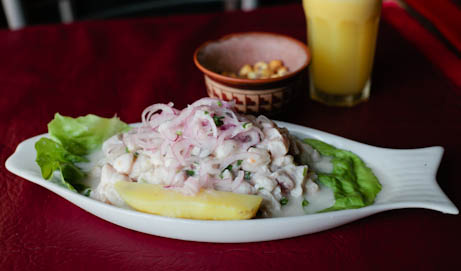 The first time that I tried ceviche was in February 2009, as the second course of a set lunch in Peru’s old centre. And after just one bite, I was hooked.

If you are unfamiliar with ceviche (or cebiche, depending on who you ask), it’s typically fresh, raw, fish marinated in lemon or lime juice. So, it’ not particularly surprising that I hadn’t tried it – growing up on the prairies gave me an aversion to most fish, particularly of the uncooked variety. But since 2009, I’ve been on the lookout for ceviches. And Primavera Trujillana in Belgrano did not disappoint.

I probably wouldn’t have ever tried Primavera Trujillana if not for a random coincidence. I had to go to Belgrano (a neighbourhood I’d never been to before) to pick up my race pack from the Club de Correodors, and the day before, I saw a post by Pick up the Fork extolling the virtues of Primavera Trujillana. As luck may have it, the restaurant was only about 5 blocks from the club. It’s almost as if it was meant to be.

The restaurant itself is not going to win any awards for atmosphere. Though I love the cute yellow exterior, the inside is quite dark, with tables crammed just a little too close together. The walls are covered with cheesy tourist shots of Peru.

But none of that mattered… why? Because of … 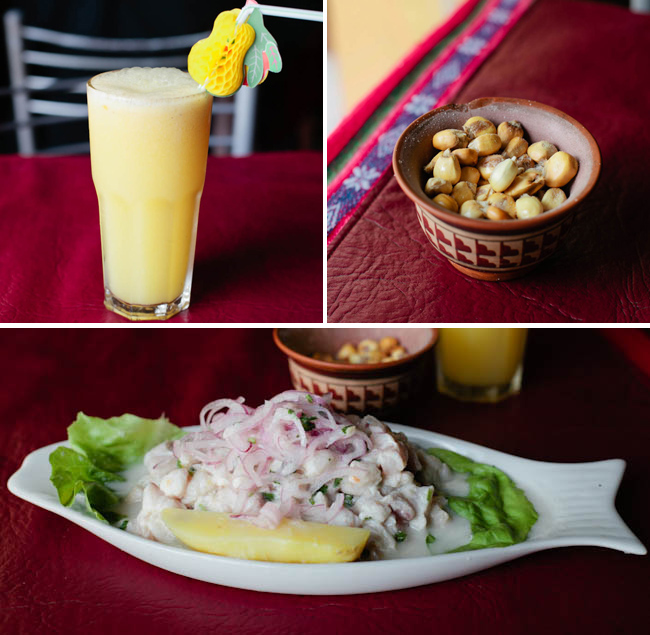 I wish with all my heart that a) either I hadn’t gone to this restaurant by myself or b) they had had a set meal with a few courses. Because after one taste of my gigantic fish-shaped plate of ceviche (56 pesos/$14) I knew this place had something special. The fish was so fresh – not one “fishy” bite in the whole plate.

The other thing I love about Peruvian restaurants is the cancha (toasted corn). Talk about an addictive crunchy corn snack. I polished off the entire bowl myself – I’m quite sure if I went with a friend we’d have to order extra.

I topped off my meal with a jugo de maracuya (passion fruit juice). While it was super tasty, it came it at 25 pesos (almost $6), a little much for my wallet.

While delicious – at 90 pesos ($22) (including tip) for lunch, this was by no means a bargain. Next time, I would go for dinner, take a friend (or two), swap out my juice for pisco sours (26 pesos) and share several dishes of Peruvian goodness.